Honorary Doctorate from The University of KwaZulu-Natal, South Africa 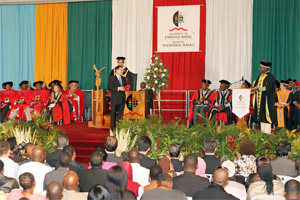 Hiromasa Ikeda accepting the appointment certificate on behalf of his father

On April 22, 2013, Daisaku Ikeda, Soka University founder and SGI president, received the degree of Doctor of Social Science, honoris causa, from the University of KwaZulu-Natal, South Africa. The university presented its highest honor to Mr. Ikeda in recognition of "his unique contributions to the fields of education, peace and the promotion of dialogue." His son Hiromasa Ikeda, a Soka University trustee, traveled to South Africa to receive the award on behalf of his father. The conferral took place at a graduation ceremony in the historical city of Pietermarizburg, the capital of KwaZulu-Natal Province. Attending were some 2,500 people, including Acting Chancellor Professor R. Vithal, Deputy Vice Chancellor and head of the College of Humanities Professor C. Potgieter, graduates and their families and SGI-South Africa representatives.

The University of KwaZulu-Natal was formed in 2004 by a merger of the University of Natal and the University Durban-Westville and is ranked as one of Africa's top research universities. Around 42,000 students matriculate in its four colleges that spread across five campuses: Agriculture, Engineering and Science; Health Sciences; Humanities; and Law and Management Studies.

In an acceptance message, Mr. Ikeda urged the new graduates to overcome all challenges before them and become a source of light and hope, heralding a renaissance of Africa. "Africa has a great gift to offer to the rest of the world, a human face that can replace the brutal and violent realities of our times," he remarked, recalling the conviction of anti-apartheid activist and Black Consciousness Movement founder Steve Biko (1946-77), a former student of the University of Natal. "In my discussions with leaders from around the world," Mr. Ikeda continued, "I have stressed that the power to humanize global society into a more caring community can be found in Africa, from its fount of wisdom and culture."

Mr. Ikeda quoted the words of Mahatma Gandhi, who began his life of activism in Pietermaritzburg: "When the inner lamp burns, it illumines the whole world." Acknowledging the pall of violence, inequality and injustice that besets the world, the SGI President expressed his belief that all these challenges can be overcome so long as we do not lose hope. "If there is no hope to be found, let us create it. If there is no light to revel in, let our lives shine like the sun." The strength of such conviction is demonstrated in the life of Nelson Mandela, he said, reminiscing about his meetings with the former South African president.

"My heart quickens with anticipation, struck deeply by the knowledge that the new century of Africa--which is synonymous with a century according life the dignity it deserves--is about to unfold here, from South Africa, before my eyes," he said.

Mr. Ikeda closed his remarks with a poem he composed for the occasion that contained the following lines:

The honorary degree was Mr. Ikeda's sixth from universities on the African continent.

[Adapted from an article in the April 25, 2013, issue of the Seikyo Shimbun, Soka Gakkai, Japan]