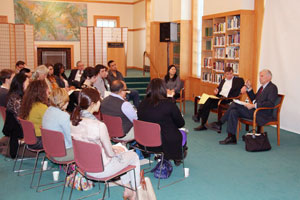 Drs. Garrison and Hickman lead a discussion on the value of dialogue

On April 6, 2013, the Ikeda Center for Peace, Learning, and Dialogue hosted a discussion on themes drawn from A New Humanism: The University Lectures of Daisaku Ikeda, a collection of addresses the author delivered to such institutions as the Brazilian Academy of Letters, Harvard University, Institut de France and Peking University from 1974 to 1994. Led by Drs. Jim Garrison and Larry Hickman, both former president of the John Dewey Society and partners in dialogue with Mr. Ikeda, the discussion was attended by university students from the Boston area and across the nation.

The overarching message of the event was the need to embrace multiple modes of dialogue if human beings are to achieve fulfilling lives and the peaceful global community sought by people of goodwill everywhere.

The first topic discussed during the two-hour seminar was how to transform our lesser self and come to recognize and foster our greater self. In Buddhism, the former is associated with selfish, limited desires and the latter with compassion and empathy. Dr. Garrison, professor of philosophy of education at Virginia Tech University (VTU), observed that Mr. Ikeda articulates an important perspective by insisting that, in the VTU scholar's words, "in striving to discover the greater self, the genuine Buddhist approach is not to try to suppress or wipe out the lesser self, but to control and direct it so as to help lift civilization to better, higher levels." Dialogue, Dr. Garrison added, is a form of relationship that is especially fruitful in fostering the greater self.

Dr. Hickman, director of the Center for Dewey Studies and professor of philosophy at Southern Illinois University Carbondale, found commonalities with the views of such American Pragmatists as William James with dialogue as a form of relationship. In "de-reifying" the self, James saw it was an organization of "habits, desires, motivations and relationships," explained Dr. Hickman. While this organization can be unstable, especially in times of crisis, the self is constantly being subject to influences--which also means that people have the power to shape the direction in which the self grows. He also said the "greater self is recognized by its capacity to create bridges of dialogue across the divides that separate theistic religious believers from non-theists," as well as across religious traditions.

A major subtheme of the discussion was balancing the positive and negative aspects of technological innovation. Dr. Hickman said the scientific method can free people from resorting to authoritarian or a priori claims as to what constitutes the ethical and good, and that experimentation in this view is a dialogue with truth.

Founded by Mr. Ikeda in 1993, the Ikeda Center is a think tank engaged in the search for ideas and solutions to assist in the peaceful evolution of humanity, offering a range of perspectives on key issues in global ethics. Among its programs are public forums and scholarly seminars that are organized in collaboration with other institutions. The Center also publishes books on education and global concerns, works that have been used in more than 600 college and university courses to date.

[Adapted from an April 23, 2013, press release issued by the Ikeda Center for Peace, Learning, and Dialogue, Cambridge, Massachusetts, USA, and an article in the April 13, 2013, issue of the Seikyo Shimbun, Soka Gakkai, Japan; photo courtesy of the Ikeda Center]