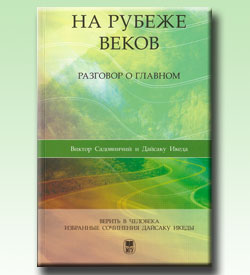 Mr. Ikeda and Dr. Sadovnichy first held discussions in November 1992, when Mr. Ikeda welcomed Dr. Sadovnichy to Soka University and the two discussed the future of education. This first encounter and subsequent discussions culminated in two published dialogues in Japanese, Atarashiki jinrui o, atarashiki sekai o (working title: Beyond the Century: Dialogue on Education and Society) in 2002, and Gaku wa hikari--bunmei to kyoiku no mirai o kataru (working title: The Illuminating Power of Learning) in 2004. The dialogues were later published in Russian as a single book in 2004 in conjunction with the 250th anniversary of MSU's founding.

A further dialogue between Mr. Ikeda and Dr. Sadovnichy was serialized in Japanese in the monthly literary magazine Ushio from June to November 2011 and published in Japanese in book form earlier this year under the title Asu no sekai, kyoiku no shimei--nijuisseiki no ningen o kosatsu suru (tentative translation: The Mission of Education in Tomorrow's World--Thoughts on Humanity in the 21st Century). 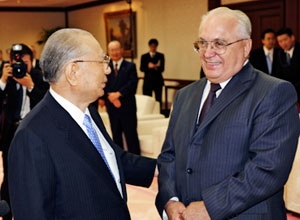 The recent collection of dialogues published by MSU Press consists of two sections, the first covering discussions between Mr. Ikeda and Dr. Sadovnichy through 2004, and the second, their dialogue of 2011. The collection also contains speeches given by Mr. Ikeda at the MSU Culture Palace in 1975 and 1994, as well as a poem he wrote in 2002 titled Idai naru mosukuwa daigaku ni sasagu—minshu no daichi ni tatsu eichi no hikari no hashira (tentative translation: Dedicated to the Eminent Moscow State University--The Brilliant Pillar of Wisdom of the Ordinary People).

In a foreword to the newly published collection, Dr. Sadovnichy and Mr. Ikeda refer to the wide range of topics they have discussed to date, including the dangers inherent in advanced technologies. The most atrocious of these are nuclear weapons. An error in judgment with regard to the use of such technologies could threaten the entire human civilization. The authors are of the view that humanistic education grounded in a humanitarian worldview is vital for eliminating the shadow cast over the world by these threats.

[Adapted from an article in the August 23, 2013, issue of the Seikyo Shimbun, Soka Gakkai, Japan]