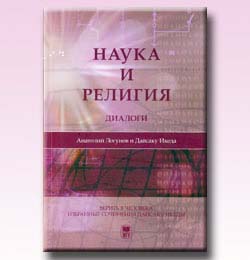 The second dialogue between Dr. Anatoly Logunov and Daisaku Ikeda makes up the fourth volume in the selected works collection of the Russian Daisaku Ikeda series.

This latest MSU release is the second dialogue between former MSU Rector Dr. Anatoly Logunov and Mr. Ikeda, originally published in Japanese in 1994 as Kagaku to shukyo (tentative translation: Science and Religion). In their work, Dr. Logunov, a theoretical physicist, examines humanity's most enduring questions--from life and death to the differences between the mind and the soul--from the perspective of Western science, while Mr. Ikeda addresses these issues from the vantage of Buddhist thought. They arrive at common ground, agreeing that toward the future, science and religion must serve humanity as partners rather than as adversaries. The two first met in Moscow in 1981.

The comprehensive collection launched with the rerelease of Moral Lessons of the Twentieth Century, a dialogue between former Soviet President Mikhail Gorbachev, who is also an MSU alumnus, and Mr. Ikeda. The second and third volumes were also dialogues--one with Russian cosmonaut Aleksandr Serebrov, and the other with the late Kyrgyz writer Chingiz Aitmatov (1928-2008), Ode to the Grand Spirit.

MSU Press was established on May 8, 1756, and stands among the most prestigious publishers of literary and academic works in Russia.

[Adapted from an article in the February 15, 2013, issue of the Seikyo Shimbun, Soka Gakkai, Japan]