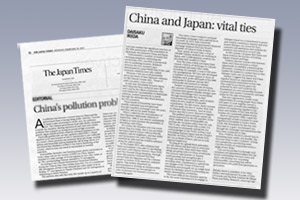 Mr. Ikeda's essay on healing Sino-Japanese relations carried on the editorial page of The Japan Times

In "Most Inhumane of Weapons," an article for the online news agency Inter Press Service (IPS) on February 21, 2013, Mr. Ikeda presents three proposals for averting a nuclear catastrophe: making disarmament a priority of the Sustainable Develop Goals (SDGs); initiating a negotiation process for a Nuclear Weapons Convention; and holding an expanded summit toward a nuclear-weapon-free world. [Link to "Most Inhumane of Weapons" on the IPS site]

In an opinion editorial for the English language daily The Japan Times, while calling attention to recent escalating tensions between China and Japan, Mr. Ikeda shares his optimism for the future of Sino-Japanese relations. In his view the current crisis can be seen as a unique opportunity to develop a lasting foundation of a partnership for peace and creative coexistence through new initiatives such as regular summit meetings between leaders of the two countries and joint efforts to promote environmental cooperation in East Asia. [Link to "China and Japan: vital ties" on Opinion page of The Japan Times]

[Adapted from articles in the March 6, 2013, issue of the Seikyo Shimbun, Soka Gakkai, Japan; Inter Press Service column dated February 21, 2013; and an essay published in the Opinion page of the February 25, 2013, issue of The Japan Times ]