On February 27, 2013, the Kyrgyz-Chinese Humanitarian Economic Institute of Kyrgyzstan presented Daisaku Ikeda, Soka University founder and SGI president, with an honorary professorship, honoring his contributions to mutual understanding and harmony among diverse cultures, religions and civilizations. A conferral ceremony by proxy was held on the Soka University campus in Hachioji, Tokyo, attended by the Kyrgyz Institute's Rector Dzhumakan Omukeeva and secretary Dinara Asanalieva, together with Hironobu Ito, rector's aide at the Kyrgyz-Russian Academy of Education. Rector Omukeeva entrusted the appointment certificate together with the university cap and gown to Soka University President Hideo Yamamoto.

The Kyrgyz institute, which aims to foster global-minded leaders, is located in the 3,000 year-old city of Osh, Kyrgyz, known as "capital of the south." The city has an ethnically diverse population of some 250,000, comprising those of Kyrgyz, Uzbek, Russian and Tajik heritage.

In her presentation speech, Rector Omukeeva commented that Mr. Ikeda is renowned among scholars and educators in Kyrgyzstan for his wide-ranging contributions to advancing education, dialogue and understanding between diverse cultures and civilizations. The educational system founded by Mr. Ikeda is grounded in an ethos of lofty actions and love of humanity, she stated; and it is education such as this, based on a humanitarian creed, which will enable humanity to address issues of poverty, conflict and illiteracy that hinder contemporary society.

In a message for the ceremony, Mr. Ikeda expressed his deep appreciation for the accolade and for the special commendation presented to his wife from the Kyrgyz institute, saying he wished to share these honors with the women of the SGI throughout the world who are striving to contribute to a peaceful society. He commended Rector Omukeeva for overcoming numerous obstacles as the first woman in Kyrgyzstan to receive a doctorate in political science.

Mr. Ikeda also shared words of his friend and Kyrgyz writer and diplomat the late Chinghiz Aitmatov (1928-2008), who believed that there would come a time when we will have overcome differences of country, society, ethnicity and language and will no longer lay claim to being victors and the vanquished but, as global citizens, regarding everyone living on Earth as brothers and sisters. 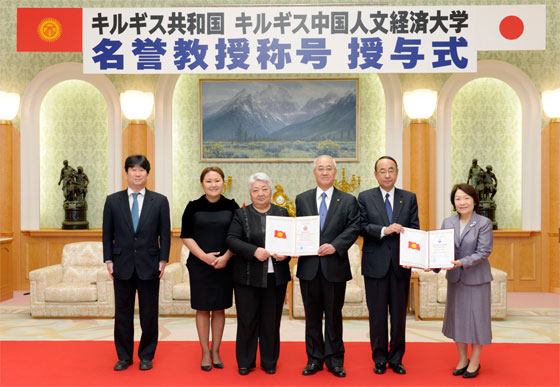 [Adapted from an article in the February 28, 2013, issue of the Seikyo Shimbun, Soka Gakkai, Japan]