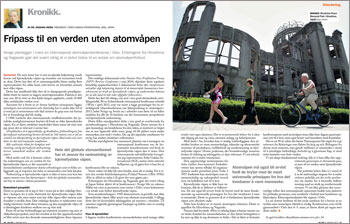 SGI President Daisaku Ikeda's essay "Passport to a nuclear-free world" was carried in the January 4, 2013, edition of Ny Tid (New Time), a weekly international news magazine published in Norway. In it, he underscored the inhumane nature and consequences of atomic weapons, which he condemns as serving no purpose other than mass, indiscriminate slaughter and the wreaking of long-term devastation on the natural environment.

Mr. Ikeda also decries the diversion of vast human, technical and financial resources toward the development, production and maintenance of nuclear weapons when there is an urgent and growing need for the universal provision of adequate food and water, sanitation and healthcare. "This state of affairs, in which the resources necessary to life are instead dedicated to slaughter and destruction, is profoundly inhumane," he writes. "We must work together to change it."

Mr. Ikeda emphasizes the critical necessity of civil society uniting to push forward stagnant political processes toward the ultimate demise of such inhumane weapons. He voices his strong support for the international Conference on the Humanitarian Impact of Nuclear Weapons, held subsequently in Oslo from March 4-5, in which SGI representatives also participated.

[Adapted from an article in the February 5, 2013, issue of the Seikyo Shimbun, Soka Gakkai, Japan]