Hebrew Edition of One by One: The World Is Yours to Change Published in Israel 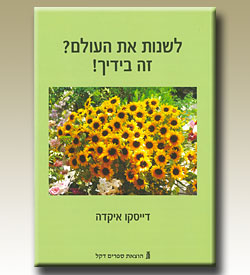 Hebrew edition of One by One: The World Is Yours to Change

TEL AVIV, Israel: Dekel Publishing House recently released a Hebrew edition of One by One: The World Is Yours to Change, a collection of thematic essays by Daisaku Ikeda. In the essay collection the author writes about the attitudes and behaviors that he believes to be essential for the advancement of peace. Among the individuals he draws on for instruction and inspiration are Mahatma Gandhi, Rosa Parks and Torao Kawasaki.

One by One: The World Is Yours to Change is the first book by Mr. Ikeda to be published in Hebrew, making it the 43rd language into which his works have been translated. Dekel Publishing House was originally founded as an academic publishing company in 1975, but has since diversified into a range of other genres, including fiction and books for children. The Hebrew edition of One by One became a reality after Dekel actively lobbied for its release in Israel, with Dekel Managing Director Zvi Morik, personally taking part in the translation effort.

In the foreword of the Hebrew edition, Mr. Ikeda recalls his meeting with members of the famed Efroni Children's Choir from Israel. The all-girl choir toured Japan in July 1995 at the invitation of the Min-On Concert Association, a non-profit organization that Mr. Ikeda founded to promote international cultural exchange and peace through music. "Nothing is more precious than life," he writes in the foreword. "This is true for adults as well as children, for men and women, and for people of any country, any ethnicity, regardless of what one may or may not believe."

[Adapted from an article in the July 15, 2013, issue of the Seikyo Shimbun, Soka Gakkai, Japan]