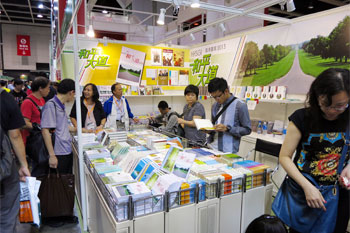 SGI-Hong Kong sponsored a booth at Hong Kong Book Fair 2013 to introduce 180 of Daisaku Ikeda's works in Chinese, English and Japanese. Organized by the Hong Kong Trade Development Council, the book fair was held at the Hong Kong Convention & Exhibition Center from July 17-23, 2013, with participation by 560 publishing companies and other organizations from 30 countries and territories.

[Adapted from an article in the August 3, 2013, issue of the Seikyo Shimbun, Soka Gakkai, Japan]