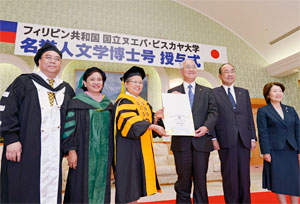 The nomination for an honorary doctorate for Mr. Ikeda was submitted by Dr. Dumlao, who had been impressed by Mr. Ikeda's philosophy for fostering peacebuilders through education and his efforts to engage in dialogue with leaders, scholars and activists from all walks of society. The university's Board of Regents unanimously approved the nomination.

In a citation, Mr. Ikeda was recognized for his achievements as a proponent for peace, an educator, philosopher and writer and for his passion to promote mutual understanding and friendship between different national cultures.

In an acceptance message read by a representative, Mr. Ikeda recounted how NVSU, which had began as a farm settlement school in 1916, had been forced to close in 1941 because of the invasion by the Japanese military. He deplored war as "the cruelest form of evil" that destroys life and sacrifices youth, robbing them of the light of learning. Education, by contrast, he remarked, is "a manifestation of ultimate humanity underpinned by respect for life." With reference to the NVSU's school song, Mr. Ikeda remarked that wisdom is the source of power that links the arts and sciences. Wisdom is necessary, he stated, in order for us to "leverage our advanced knowledge and technology into vast silos of information for the sake of all people's happiness and prosperity, and for peaceful coexistence in the global community."

Mr. Ikeda closed the message by dedicating himself to always learn, toil and advance together with the people toward a victorious future, and shared excerpts from a poem to youth by José Rizal, hero of Philippine independence:

Thou, who by sharp strife
Wakest thy mind to life;
And the memory bright
Of thy genius's light
Makest immortal in its strength.

[Adapted from an article in the March 16, 2013, issue of the Seikyo Shimbun, Soka Gakkai, Japan]