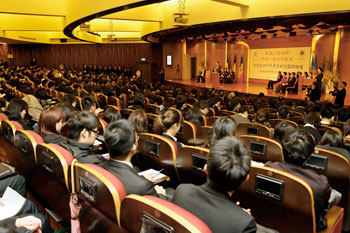 On March 2, 2013, the Daisaku Ikeda Research Center of the Chinese Culture University (CCU) in Taipei, Taiwan, held its 7th international forum on the research of Daisaku Ikeda's peace ideals. The event commemorated the center's 10th anniversary and drew around 400 scholars and students from 42 universities and research institutes in Taiwan, mainland China, the USA, Philippines and Japan. Some 51 research papers were presented. Mr. Ikeda sent a message for the event.

Director Li Yan-Liang gave an overview of the work carried out by the CCU Daisaku Ikeda Center since its inception in 2003, highlighting Mr. Ikeda's published dialogues with scholars and leaders and the compilation of papers written by Chinese scholars exploring his ideals.

In a keynote speech, CCU Board of Directors Chair Dr. Chang Jen-Hu cited the SGI leader's 1991 speech at Harvard University, "The Age of 'Soft Power' and Inner-Motivated Philosophy," calling attention to the rising tide of soft power, such as knowledge, information and culture, and lauded Mr. Ikeda for delving into the core concept of an "inner-directed revolution," a key factor driving soft power. Dr. Chang also paid tribute to the SGI leader for his many dialogues with world leaders and thinkers that have paved the way for dynamic discussions on history, culture and solutions to critical issues of today's global community. [Dr. Chang and Mr. Ikeda, who have met on several occasions, published their dialogue in Japanese, Kyoiku to bunka no odo (tentative translation: "The Noble Path of Education and Culture"), in May 2010.]

In a message read by proxy, Mr. Ikeda thanked Center Director Li, former director Lin Tsai-mei, researchers and staff for their dedicated efforts to compile and translate his works into Chinese. During their discussions, which spanned two years, Dr. Toynbee had asked if a person is able to change one's karma. Mr. Ikeda replied that the law of causality is not static, but continues from one moment to the next. Through human revolution--an inner-directed positive reformation--each individual can tap and manifest a strong life force that can change the course of one's life and even transform society. Dr. Toynbee had concurred with this idea.

He also noted that the challenge to transform society is a gradual process requiring our belief in the boundless potential of each life as well as our engaging with one another to draw forth this potential. Mr. Ikeda stated this concept finds resonance with the ideals of CCU founder Dr. Chang Chi-yun, who believed the Chinese character for "humane" holds the key to CCU's philosophy and means manifesting one's humanity, protecting human rights and cultivating one's character. Mr. Ikeda expressed his hope that young people would carry on this legacy, strengthening and elevating humankind, human rights and human life force, to create a renaissance of the heart and mind.

Following the presentation of other papers, participants split up into 12 groups to discuss topics such as peace, culture, education, respect for life, and spiritual renaissance.

[Adapted from an article in the March 19, 2013, issue of the Seikyo Shimbun, Soka Gakkai, Japan]