University of the Humanities of Mongolia Presents Honorary Doctorate

On November 15, 2013, the University of the Humanities (UH) of Mongolia presented Soka University founder Daisaku Ikeda with an honorary doctorate of humanities for promoting peace and humanistic perspectives, and for contributing to the sound development of youth. UH President Begz Chuluundorj, Professor Zegiimaa Choidon, director of its graduate school, Battuvshin Chuluundorj, director of the UH International Affairs Office, and Mongolia-Japan Friendship Association President L. Dashpurev traveled to Japan for the presentation by proxy held at the Soka University campus in Hachioji, Tokyo.

Located in Ulaanbaatar, UH was established in 1979 as a Russian-language college and began offering foreign language instruction from 1990. Today, the 5,000-student university offers undergraduate studies in information and communication management, language and culture, and business, as well as a graduate program. The UH has also entered into academic exchange programs and cooperative ventures with 28 universities around the world.

"To teach that people are not some accessory to technology and to empower them to take the reins of their own lives–to do this while imparting the meaning of life that stands the test of time or any change in circumstance--has profound significance for generations of young people," explained President Chuluundorj in his presentation address. "We hold these activities, which Mr. Ikeda has undertaken out of his vision of the future, as invaluable and highly deserving of recognition."

In his acceptance speech read by Soka University Board of Trustees Chair Yasunori Tashiro, Mr. Ikeda expressed deep appreciation to the Mongolian university for the academic honor and pointed to three lessons that can be drawn from the university's core principles and traditional beliefs of Mongolia. The first is to promote unity through dialogue. "Language," he noted, serves as a means for strengthening the bonds between people and is the bridge that links one civilization to another. The second is to achieve progress through creative and innovative action. The struggle of youth is to surmount the difficulties and barriers that stand before them so they may blaze a new trail. Adversities exist so that they may be vanquished for achieving success. The third lesson: to remain humble in one's service to others. No way of life is more robust and worthy than one committed to living together with, among and for the the people, he said. 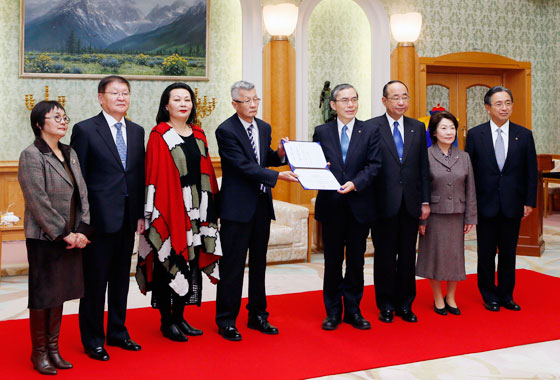 [Adapted from an article in the November 16, 2013, issue of the Seikyo Shimbun, Soka Gakkai, Japan]