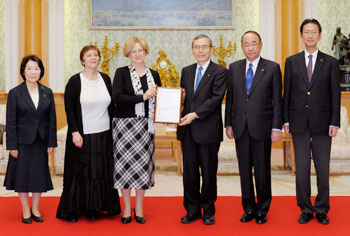 On November 22, 2013, the Pushkin State Russian Language Institute presented an honorary doctorate to Soka University founder Daisaku Ikeda at a ceremony by proxy, held at the Soka University campus in Hachioji, Tokyo. Mr. Ikeda was recognized for his contributions to lasting peace and cultural exchange. Deputy Rector for International Affairs Smirnova Nadezhda and Tatiana Korepanova, head of the Department of Russian Teaching Methodology, traveled from Russia to present the degree certificate.

Originally established in 1996 as a Russian language teaching and research center at Moscow State University, in 1998 Pushkin State Russian Language Institute was granted its present status as a state university. The Institute specializes in teaching Russian to international students and in training teachers to teach Russian as a foreign language. Through its three faculties--philology, continuing education and Russian instruction as a foreign language--it has fostered numerous interpreters and experts who use Russian in their respective fields. Every year over 3,000 students from some 70 countries matriculate at the institute. To date, the institute has graduated over 100,000 international students from 91 countries.

In a citation, Deputy Rector Nadezhda, representing Rector Yuri Prokhorov, remarked that the honorary doctorate from the Russian institute is bestowed upon scholars, teachers and social activists who are deemed to have made far-reaching contributions to promoting and spreading the Russian language and culture on a global scale. Dr. Nadezhda expressed her respect for Mr. Ikeda, who has long dedicated himself to advancing friendship between Russia and Japan and under whose auspices Soka University has trained many experts in Russian language and culture.

In a message, Mr. Ikeda recalled his first trip to Russia in the autumn of 1974 and how enthralled he was by the rich timbre and lyrical rhythm of the Russian language as he and his delegation were greeted by the welcome party. The seminal literary masterpieces woven in this robust language have, he stated, deeply inspired people the world over, infusing them with hope and courage to traverse their lives. He counts himself among them, he said, having avidly devoured many of these masterworks in his youth. He lauded the Russian institute's namesake, Alexander Pushkin (1799-1837), who breathed fresh life into Russian literature by boldly suffusing it with the colloquial language of ordinary Russians. He expressed his deep appreciation for the honorary doctorate and his profound respect for the Pushkin State Russian Language Institute which has safeguarded Pushkin's treasured legacy.

[Adapted from an article in the November 23, 2013, issue of the Seikyo Shimbun, Soka Gakkai, Japan]