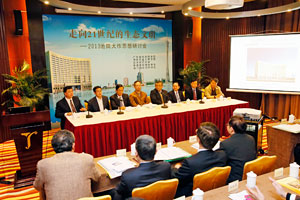 Symposium titled, "Toward an Ecological Civilization in the 21st Century" in Guangzhou City

On November 23, 2013, Guangdong Academy of Social Sciences and Zhongkai University of Agriculture and Engineering cohosted a symposium titled "Toward an Ecological Civilization in the 21st Century" in Guangzhou City, Guangdong Province.

Some 50 scholars from 21 universities and academic institutions, from both China and Japan, participated in this symposium to discuss ways to create a sustainable and ecologically sound global society based on Daisaku Ikeda's philosophy and thought.

In his address, vice-chairman of the Standing Committee of Guangzhou Municipal People's Congress Zhang Jiaji noted that Mr. Ikeda's philosophy, which emphasizes the interconnected relationship between human beings and their natural environment, accords with the ideal of an "ecological civilization"--a sustainable global society--that China is currently moving towards. He was confident that a further discussion of Mr. Ikeda's philosophical approach would raise greater awareness of the need to create a sustainable global society. A professor presenting from Zhaoqing University, Yuan Qinglin, pointed to the progressive nature of Mr. Ikeda's philosophy, noting that many of the issues raised in his dialogues thirty or forty year ago are still just as relevant today. A total of 17 papers were presented.

In a message read by the vice president of Soka University, Hirotomo Teranishi, Mr. Ikeda stated that the construction of an ecological civilization is a critical global mandate, which the world needs to address together. Toward this end, he stressed two points: promoting the harmonious coexistence between human beings and nature, which is a legacy of Chinese culture, and further strengthening international cooperation to address global environmental issues.

[Adapted from an article in the November 26, 2013, issue of the Seikyo Shimbun, Soka Gakkai, Japan]