On November 6, 2013, the Peruvian University of the Americas conferred an honorary doctorate upon Soka University founder Daisaku Ikeda at a ceremony by proxy on the Soka University campus. Founding President of the Peruvian university Dr. Patrocinia Lastenia Fernández Pérez, accompanied by her husband Rector Luis Hurtado Valencia, entrusted the degree certificate and citation, together with a commemorative medal and trophy, to Soka University President Yoshihisa Baba and other representatives, who accepted them on Mr. Ikeda's behalf.

Dr. Hurtado is a lawyer as well as a proponent of lifelong learning for the happiness and well-being of both the educator and student, and Dr. Fernández has dedicated her life to philanthropy and education, establishing preschools through vocational schools. The two worked together to found the Peruvian university in 2002 and developed it into a reputable institution of higher learning in just one decade, enrolling 10,000 students in faculties such as law, business administration, communication and engineering.

In a citation, Rector Hurtado said, as one who is passionate about education himself, he has been deeply inspired by Mr. Ikeda, who believes "education, which fosters people, is a most sacred undertaking." Dr. Hurtado expressed his heartfelt respect and admiration for Mr. Ikeda's distinguished achievements remarking that through the institutions he has founded, encompassing education, culture and the arts and peace, Mr. Ikeda has contributed to advancing human rights, nonviolence, environmental ethics, women's leadership and economic justice.

In a message expressing his appreciation for the accolade, Mr. Ikeda remarked that this year, 2013, marks 140 years since Peru established diplomatic ties with Japan, becoming the first Latin American country to do so. Presently, there are some 90,000 Peruvians of Japanese descent, and since 1873 many Peruvians have also come to Japan to forge exchanges. Having personally experienced the egregious system of education run by a nationalistic military regime bent on inculcating blind obedience among its Japanese subjects, Mr. Ikeda praised Rector Hurtado's and Dr. Fernández's commitment to founding educational institutions that foster in youth a spirit of self-motivated learning as well as the wisdom to challenge even failure as an opportunity for continuous development and growth. He reaffirmed his own commitment to education, recalling a meeting with officials of the National University of San Marcos, the alma mater of Drs. Hurtado and Fernández, during which they concurred that because humans are at the same time the creators and destroyers of peace, education has a vital mission of guiding humanity's collective wisdom toward a culture of peace. 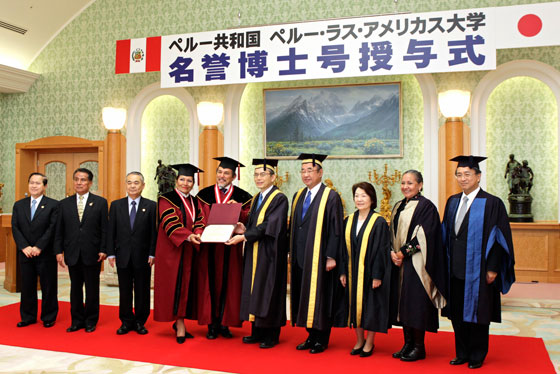 [Adapted from an article in the November 7, 2013, issue of the Seikyo Shimbun, Soka Gakkai, Japan]