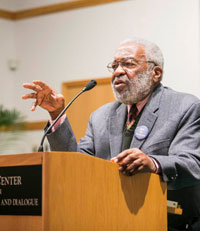 On November 9, 2013, the Ikeda Center for Peace, Learning, and Dialogue located in Cambridge, Massachusetts, USA, held its tenth annual Ikeda Forum for Intercultural Dialogue. At the urging of keynote speaker Vincent Harding, the forum entitled "We the People: Who Are We and What Is Our Work?" became not just a forum devoted to dialogue, but also a "laboratory" devoted to the cultivation of dreams of freedom and democracy.

Vincent Harding is chair of the Veterans of Hope Project and professor emeritus of religion and social transformation at the Iliff School of Theology in Denver, Colorado. Dr. Harding is also coauthor, with Daisaku Ikeda, of the recently published book titled, America Will Be! Conversations on Hope, Freedom, and Democracy, the latest publication from the Ikeda Center's Dialogue Path Press.

Dr. Harding was introduced by Ikeda Center senior research fellow Virginia Benson, who recounted the evolution of the historian's relationship with the center's founder Daisaku Ikeda. The two men first met on January 17, 1994, when Dr. Harding and his wife visited Japan to see their son, who was studying there. After their first meeting, Mr. Ikeda shared his impression of Dr. Harding, stating: "I sensed in him the passion of a proud, steadfast champion of human rights and an unbending resolve to battle all forms of prejudice and inhumanity that threaten the dignity and worth of human life."

Stepping up to the podium, Dr. Harding prefaced his remarks, saying: "One of the beautiful things about getting to be 82 years old is that you gather a tremendously loving company of fellow travelers, and I am happy to see so many of you now, who I have considered my fellow travelers for a long, long time." 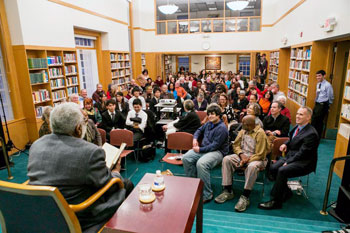 To give greater context to his talk, Dr. Harding shared the insight of Gus Newport, a fellow member of a group called the National Council of Elders. Mr. Newport said in effect, "Please remember that this great American experiment in multiracial democracy is still in the laboratory." This is significant for a few reasons, said Harding. The word "laboratory," he explained, is "a word of hope, a word of possibility, and a word of some humility." Critically, a lab is where you "are expected to make mistakes."

Harding concluded his formal remarks by addressing one crucial dimension of democracy building, namely the cultivation of dreams. This was a notion exemplified by Langston Hughes (1902-67) an American poet, social activist, and leader of the Harlem Renaissance, who in Harding's words, "like any true creative artist was essentially saying: We cannot have a democratic America unless we first dream it and are willing to take the risks to dream what we have never seen and have been told is impossible."

For the second half of the forum, Dr. Harding asked attendees to break into small groups to consider an ever-expanding set of dreams: What is your dream of a new neighborhood? A new city? A new America? And finally, a new role for America in the world?

A full hour was devoted to this portion of the event. Topics covered included: maintaining hope for the future in the face of human suffering; learning to see our shared humanity while still appreciating our differences; creating a world where we would feel no need to lock our doors; finding a way to deal with all the anger and pain that arise when we talk about race; and trying to help others without pushing our values on them.

To conclude the forum Dr. Harding urged everyone to not "be afraid of dreams," adding that "the capacity to dream is an absolutely human capacity." We should also understand, he said, that a big part of the work for those of us who believe in freedom and democracy is that "we cannot rest from dreaming." Above all, he said, "Don't let anybody push us so far down that we are unwilling or unable to dream--for ourselves and for our neighbors."

[Adapted from a November 2013 article by Mitch Bogen featured on the Ikeda Center for Peace, Learning, and Dialogue website also reported in the December 14, 2013, Seikyo Shimbun, Soka Gakkai, Japan]