On October 8, 2013, Dalian Art College (DAC) of China awarded Soka University founder Daisaku Ikeda with an honorary professorship in recognition of his contributions to the advancement of global peace, cultural exchange and education and for his steadfast promotion of Sino-Japanese relations over the years. DAC Chairman of the Board of Trustees Wang Xianjun, President Yu Jiayou and Vice Rector Li Changyuan traveled to Japan for the presentation by proxy held at the Soka University campus in Hachioji, Tokyo.

Located in northeastern China, DAC comprises seven faculties, including music, art, media, design and fashion, enrolling some 10,000 students. The college, which was founded in 2000, is one of the few privately operated institutes of higher learning in the country. In presenting the honorary professorship, President Yu cited Mr. Ikeda's vision and values advocating peace, culture and education, describing them as principles that are foundational for the purpose of developing capable individuals.

In his acceptance speech read by Soka University President Yoshihisa Baba, Mr. Ikeda thanked the Chinese college for the academic honor acknowledging his body of work, particularly his contributions to bettering Sino-Japanese ties. "The 'golden bridge,' which unites the people of China and Japan and all of humanity and brings our hearts closer together, fears no gale or billow, no matter how fierce," said Mr. Ikeda. There are two parapets, he explained, that ensure the safe and ceaseless passage of people over this resplendent bridge of peace: one is education, the other, culture.

Praising DAC's record of academic excellence and in graduating men and women who are now working at the forefront of their respective fields, Mr. Ikeda went on to say, "I have reaffirmed my belief that education is itself the art of enabling the lives of young people to shine." 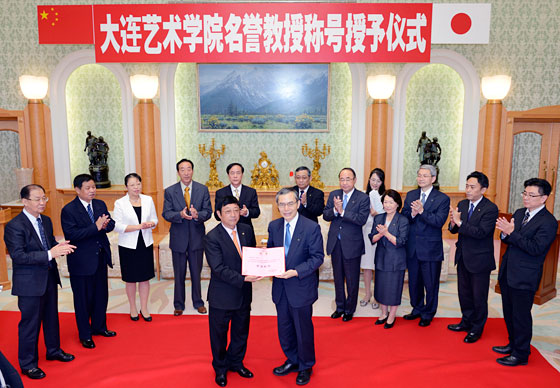 [Adapted from an article in the October 9, 2013, issue of the Seikyo Shimbun, Soka Gakkai, Japan]