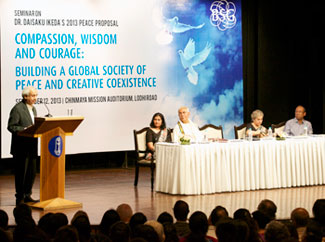 On September 12, 2013, Bharat Soka Gakkai (BSG) held its annual Peace Proposal symposium entitled, "Compassion, Wisdom and Courage: Building a Global Society of Peace and Creative Co-existence" in New Delhi, India. The discussion was based on Daisaku Ikeda's 2013 Peace Proposal that addresses such topics as sustainable development and social equity issues.

Virendra Dayal, former Chef de Cabinet to the UN Secretary General, commented that what impressed him most about Mr. Ikeda proposal was how he combined spirituality and sustainability. "His vision is both profound and optimistic," he said, adding that it is time "to internalize the difference between true and false, the religious and the pseudo." Mr. Dayal praised Mr. Ikeda's desire to foster human rights and the urgent need to work towards disarmament. He spoke at length about Mr. Ikeda's contribution to the UN and his account of how France and Germany overcame their hostility through high-level meetings and in-person communication. The more difficult the situation, the more important it is to engage in dialogue. "Silence and sulking are not stations on the road to peace," Dayal affirmed.

Also participating in the symposium was Syeda Saiyidain Hameed, member of the Planning Commission, who grew up in a conflict-ridden environment where she developed a strong passion for peace. "We have gone through the bloodiest century, but it is important now to create a culture of peace," said Dr. Hameed. She also emphasized the need for compassion to be like a touchstone in all our endeavors for peace. 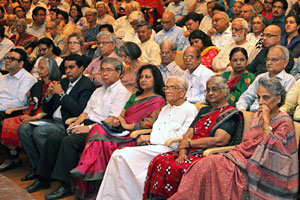 Wajahat Habibullah, chairperson of the National Commission for Minorities, also emphasized the need for a culture of peace and the importance of valuing diversity: "It is important to not just defend diversity but also to celebrate it. Too often, diversity becomes a cause for conflict but we are not in competition, we are not just tolerating but celebrating differences."

BSG Director General Naveena Reddi stated, "The peace we seek cannot be brought about through a struggle for dominance in military or economic power. It can only be won through peaceful means." She further noted that as a gathering of ordinary people, the SGI strives to empower people through education and a network of peace and culture to ensure they are not exploited by authority. "Dr. Ikeda has expressed the strong belief that the social mission of religion in the twenty-first century must be to bring people together in an ethos of reverence for life's inherent dignity and worth," she said.

Every year, since 1983 Daisaku Ikeda has published and submitted a Peace Proposal to the UN. Each proposal explores the interrelation between core Buddhist concepts and the diverse challenges global society faces in an effort to realize peace and human security.

[Adapted from a September 2013 BSG press release and an article in the September 26, 2013, issue of the Seikyo Shimbun, Soka Gakkai, Japan]