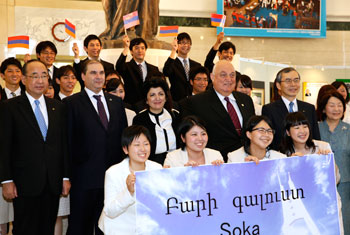 Founded in 1919 and located in the Armenian capital of Yerevan, one of the oldest cities in the world, YSU consists of 20 faculties, 1,500 instructors and 20,000 students. It is the largest institute of higher learning in the country and currently has academic and research exchange programs with some 200 institutions in more than 80 countries worldwide.

Rector Simonyan first learned of Mr. Ikeda some six years ago, while visiting Rector Victor A. Sadovnichy of Lomonosov Moscow State University (MSU). He had spotted on Rector Sadovnichy's office bookshelf a copy of Choose Life, a dialogue by British historian Arnold Toynbee and Mr. Ikeda. Being a historian himself, the YSU rector had studied Dr. Toynbee's works, but had yet to come across the dialogue. At the MSU rector's recommendation, Prof. Simonyan began reading the work--only to find himself increasingly intrigued by Mr. Ikeda's insights.

"There are a myriad of issues in the world that remain unresolved, and many people have lost faith in humankind's ability to overcome them," he explained. "Yet, not a trace of gloom can be found in SGI President Ikeda's vision for the future."

In a message read by Soka University Board of Trustees Chair Yasunori Tashiro, Mr. Ikeda expressed his gratitude to YSU for the honorary doctorate and touched upon three lessons imparted by the Armenian institution: The first is YSU's proud pursuit of academic excellence and sense of solidarity; the second, responsibility to society; and lastly, its abiding aspiration for innovation and creative solutions.

Mr. Ikeda also referred to Ivan Aivazovsky (1817-1900), the Armenia-born Russian painter, and one of his most impressive works, "The Ninth Wave." In the painting, seamen desperately cling to a makeshift raft as they face the ninth and, as seafaring legend holds, largest wave--a powerful portrayal of human courage in confronting the most daunting odds.

"Always look forward," he exhorted the audience of Soka University students and alumni who had gathered for the occasion. "I urge you to tackle every challenge with stout hearts and high spirits, no matter how fierce the billows of life may rage. And in doing so, boldly compose a vivid portrait of your lives, one spent without regret and dedicated to the creation of value, day after day."

[Adapted from an article in the September 23, 2013, issue of the Seikyo Shimbun, Soka Gakkai, Japan]