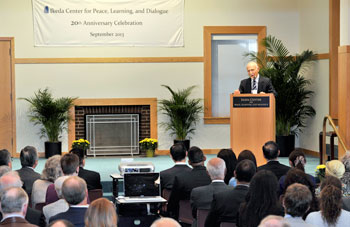 On September 28, 2013, the Ikeda Center for Peace, Learning, and Dialogue, located in Cambridge, Massachusetts, USA, celebrated its 20th anniversary. To commemorate this event, the center hosted a gathering of scholars and friends who have contributed to realizing the vision of the Center over the past two decades. In September 1993, Daisaku Ikeda delivered a lecture titled "Mahayana Buddhism and Twenty-first Century Civilization" at Harvard University, in which he highlighted the contributions Mahayana Buddhism can make to the peaceful evolution of humanity. Shortly after giving the lecture, he established the Ikeda Center (originally called the Boston Research Center for the 21st Century) as a tangible commitment to the spirit or vision behind his talk--the vision to engage diverse voices in contributing value to humanity.

The event began with welcoming remarks by current Executive Director and President, Richard Yoshimachi. This was followed by the first executive director and currently a senior research fellow, Virginia Benson, who shared memories of the Ikeda Center's founding and highlighted its achievements over the past twenty years that illustrated the Center's core values and evolving areas of focus. She recalled how, when Mr. Ikeda first met with the Center's small staff, he encouraged them saying, "from a single drop comes the mighty Mississippi River." Addressing the participants, Ms. Benson said: "As I look out at your faces today and reflect on what each of you has done with us to create this oasis of a special kind of dialogue, I feel like I am seeing the mighty Mississippi River."

Nur Yalman, professor of Social Anthropology and Middle Eastern Studies at Harvard University, has been a friend of the Center since its inception. He observed that in a time of significant strife around the world, particularly in such places as Syria and Sri Lanka, the commitment to dialogue across cultures, religions, and worldviews, as exemplified in the work of the Ikeda Center, is absolutely crucial. Dialogue, Dr. Yalman noted, lays the foundation for harmonious relationships among individuals that will enable the twenty-first century to truly become the "century of peace" envisioned not only by Mr. Ikeda, but by all people of goodwill throughout the world.

Dr. Qu Delin, Director of the Center for Japanese Studies at Tsinghua University in China, shared how Mr. Ikeda's trailblazing contributions toward the normalization of Sino-Japanese relations has earned him great respect in China. Of special importance, he noted, was when Mr. Ikeda met with Premier Zhou Enlai in 1974. Dr. Qu also stressed that the respect Mr. Ikeda has gained from the Chinese people is a direct reciprocation of the respect he has always shown them. Dr. Qu further reported that there are now more than 30 centers and institutes studying Mr. Ikeda's humanistic philosophy and ideals throughout China.

Also participating in this event was Hiromasa Ikeda, the eldest son of Daisaku Ikeda and an SGI vice president. Vice President Ikeda remarked that among the secular institutions Daisaku Ikeda has founded, the Ikeda Center is the only institute to actually bear the Ikeda family name. Mr. Ikeda explained that his father agreed to the Center's request to change its name in 2009 because his father understood that the Center would continue to carry out his lifelong pursuit of global peace through the practice of dialogue. In this manner, Mr. Ikeda said, the Ikeda name might become associated less with an individual than with a commitment to dialogue as the surest path to peace.

To conclude the celebratory gathering, a commemorative message from the center's founder, Daisaku Ikeda, was read. In the message Mr. Ikeda expressed his hope for the Center, stating: "My heart is filled with joy when I envision the future, ten years, twenty years from now, as each of you dynamically and energetically engages in dialogue spanning different cultures, religions and disciplines. And I hope that this Center may be the stage for such activities. It is my earnest conviction that the efforts we make to promote this kind of dialogue will forge a new paradigm of harmonious coexistence, guiding humankind as a beacon of hope, illuminating an enduring renaissance of life."

After the program, the participants proceeded to the Harvard Faculty Club for a reception. Winston Langley, Provost at University of Massachusetts Boston, offered a toast in which he meditated on the deep human value of acting as a heart, a bridge and a beacon at this point in human history.

[Adapted from a September 2013 article by Mitch Bogen featured on the Ikeda Center for Peace, Learning, and Dialogue website and an article in the October 2, 2013, issue of the Seikyo Shimbun, Soka Gakkai, Japan]