On April 24, 2014, Isabela State University (ISU), Philippines, presented Daisaku Ikeda, Soka University founder, with an honorary doctorate of humanities. A delegation from the Philippine university, led by President Aleth M. Mamauag attended the conferral held by proxy on the Soka University campus in Hachioji, Tokyo. Mr. Ikeda was recognized for his achievements as a "philosopher, educator, peace builder, prolific writer, philosopher and philanthropist."

Tracing its beginning to a farm school founded in 1918, Isabela State University has grown into an institution of higher learning with 11 campuses providing advanced instruction in the arts, agricultural and natural sciences as well as in technological and professional fields. Its main campus is located in Echague, Isabela.

In her greetings, President Mamauag stated, "Dr. Daisaku Ikeda's life and works are deemed vital not only to the progress of the human race, but also to the growth of the human heart." Quoting Mr. Ikeda, she said ISU's philosophy concurs that: "Education makes us free. The world of knowledge and of the intellect is where all people could meet and converse. Education liberates people from prejudice. It frees the human heart from its violent passions."

Expressing his deep appreciation for the honor bestowed upon him, Mr. Ikeda, in a message, asked young people who have had the opportunity to study at a university to "use the wisdom and capacities developed through that experience to contribute to the lives of those who have not been able to receive higher education, working alongside them to create the values of happiness and peace." He stated his belief that "this is the primary mission of the university." 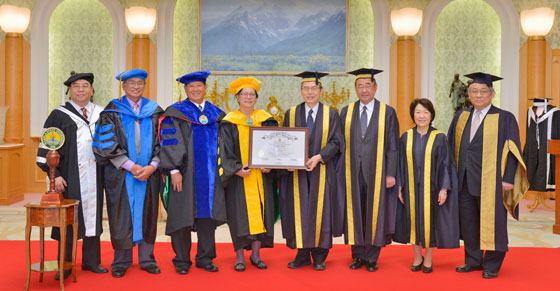 [Adapted from an article in the April 25, 2014, issue of the Seikyo Shimbun, Soka Gakkai, Japan]