America Will Be! Wins Book Award in the U.S. 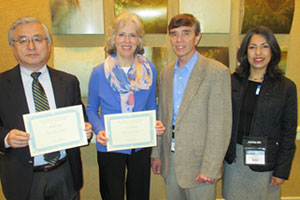 "America Will Be!" Wins Book Award in the U.S.

PHILADELPHIA, USA: America Will Be! Conversations on Hope, Freedom, and Democracy, by Vincent Harding (1931-2014) and Daisaku Ikeda, has won the Society of Professors of Education (SPE) Book Award for 2014. The award was presented on April 5th at the annual meeting of the American Educational Research Association (AERA), the largest national gathering of scholars in the field of education research, held this year in Philadelphia.

Ikeda Center President Richard Yoshimachi and senior research associate Virginia Benson accepted the award on behalf of authors Harding and Ikeda. They were joined by Professor Jim Garrison of Virginia Tech, who is current president of the SPE, and Isabel Nunez, Associate Professor of Foundations and Social Policy at Concordia University in Chicago. Founded in 1902, the SPE's primary goal is to provide a forum for consideration of major issues, tasks, problems and challenges confronting professional educators. The second chairman of SPE was the well-known educational reformer John Dewey (1859–1952), who served from 1903 to 1905. SPE members include both theoreticians and practitioners in education.

America Will Be! was released by Dialogue Path Press, the publishing arm of the Ikeda Center for Peace, Learning, and Dialogue, in August 2013, coinciding with the 50th anniversary of the historic March on Washington where Dr. Martin Luther King Jr. gave his celebrated "I Have a Dream" speech. The dialogue between Vincent Harding and Daisaku Ikeda illuminates the historic events of the American civil rights movement and underscores the vital role of people, especially today's youth, in creating a brighter future. As Ikeda concludes in America Will Be!: "Great dreams nurture extraordinary people, inspire great struggles, and build great lives, leading ultimately to a new, brighter future."

[Adapted from an April 2014, press release issued by the Ikeda Center for Peace, Learning, and Dialogue, Cambridge, Massachusetts, and an article in the April 9, 2014, issue of the Seikyo Shimbun, Soka Gakkai, Japan]