Spanish Edition of Songs from My Heart Published 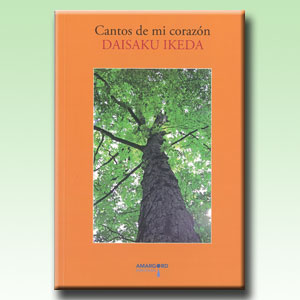 Spanish edition of Songs from My Heart

MADRID, Spain: Amargord Publishing House has released a Spanish edition of Songs from My Heart, a collection of Daisaku Ikeda's poems and photographs that he describes as a record of life's "daily whirlwind of activities." In the photographs he has taken during his travels and the poems he composed in his journal, Mr. Ikeda freely expresses his intimate hopes for the future, nature's message of strength and beauty, and his belief in people, especially youth, to create a brighter future.

On February 13, 2014, a reception celebrating the launch of the Spanish edition of Songs from My Heart was held at the University of Alcalá located in Alcalá de Henares, Spain. Professor Francisco Peña of the University of Alcalá, who also contributed the foreword to the Spanish edition, stated that Mr. Ikeda's poetry is imbued with his profound respect for ordinary people and helps the reader understand the true value of humanism. This collection of poetry, Professor Peña believes, serves to encourage and inspire the people of contemporary society.

Songs from My Heart was originally published in Japanese in 1976 and translated into English by Burton Watson in 1978. The work has also been translated into Thai, Portuguese, Tagalog, French and Mongolian.

[Adapted from an article in the February 23, 2014, issue of the Seikyo Shimbun, Soka Gakkai, Japan]