Book Launch Events for A Forum for Peace: Daisaku Ikeda's Peace Proposals to the UN in New York 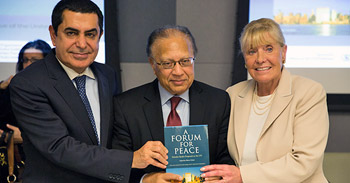 Publisher I.B. Tauris has released A Forum for Peace: Daisaku Ikeda's Peace Proposals to the UN, a compilation of excerpts from the most topical and significant of Daisaku Ikeda's peace proposals that he has written annually since 1983.

On February 20, 2014, a book launch and discussion on "Global Citizenship and the Future of the UN" was held at the United Nation in New York. The event was sponsored by the UN Alliance of Civilizations and organized by SGI, Inter Press Service and Toda Institute for Global Peace and Policy Research.

Olivier Urbain, editor of A Forum for Peace and director of the Toda Institute for Global Peace and Policy Research, introduced the book and the four main chapters: A UN Living up to its Mission; A UN to Eliminate Misery from the Earth, A UN for a World Without War; and Empowerment for Future Change. A consistent theme seen throughout Mr. Ikeda's peace proposals, Mr. Urbain said, was "a firm belief in the power of ordinary people and trust in the potential of solidarity."

Former United Nations Under-Secretary-General and High Representative Ambassador Anwarul K. Chowdhury, who also contributed the foreword, commented: "No human being in world history has written so consistently, so substantively about the work of the United Nations and the way to reform it as SGI President Ikeda." He further noted that many of Mr. Ikeda's proposals have subsequently been reflected in the work of the UN over the years.

UN High Representative for the Alliance of Civilizations Nassir Adulaziz Al-Nasser commended A Forum for Peace, further stating: "It is through the celebration of our diversity as well as through the promotion of tolerance and dispelling fears of the 'other' that we will build a more peaceful world."

In her keynote address Nobel Peace Laureate Betty Williams urged: "We could sit all day here and glorify working for peace but it's not a thing that should be glorified; it is a thing that should be done every single day of our lives." Ms. Williams, who received the Nobel Peace Prize in 1976, said she believes each person, as a global citizen, has a vital role to play in creating a more peaceful world.

In a message for the forum read by an SGI-USA representative, Mr. Ikeda stressed the importance of fostering an awareness of our role and responsibility as global citizens, to counter the impulse toward conflict and division. He also suggested key elements that could form the basis of an educational program for global citizenship.

On February 18, 2014, a seminar on A Forum for Peace was held at SGI-USA New York Culture Center. The three panel speakers at this event were Ambassador Chowdhury, Dr. Urbain and Dr. Betty Reardon a founding figure in the field of peace education. The panelists shared their personal reflections on A Forum for Peace, as well as their thoughts on how the book could be used to inform and inspire actions for peace.

Dr. Reardon shared her observation that the very act of writing the peace proposals each year makes President Ikeda a role model of the concerned citizen. "He models for us that to be prepared to engage is responsible citizenship," she said. In this way, he is both the educator and the learner who is performing creative acts of courage that are informed with hope. "It is the most brilliant form of instruction," she said.

Every year, since 1983 Daisaku Ikeda has submitted a peace proposal to the UN that presents solutions to a variety of global problems such as human security, education reform, the empowerment of women, and nuclear disarmament. Two universities in the United States are scheduled to begin using A Forum for Peace as a textbook.