Arabic Edition of Fighting for Peace Published in Dubai 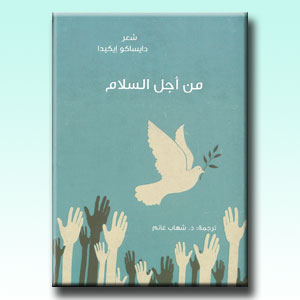 Arabic edition of Fighting for Peace

DUBAI, United Arab Emirates: On February 20, 2014, SGI-Gulf, a Dubai-based cultural and educational organization, hosted a book launch for an Arabic-English edition of Fighting for Peace, a collection of poetry by Daisaku Ikeda. These poems have been described as more than just a recitation of epic failures at winning peace and justice for all, but rather poetry that speaks to citizens and statesmen alike of undying hope for change and unbounded human potential.

The book launch was held in conjunction with SGI-Gulf's third annual poetry symposium titled, "The Poetic Heart: Connecting Humanity" at the Dubai Knowledge Village. Among the guests attending the book launch was Dr. Shihab Ghanem, a renowned UAE poet who led the translation of Fighting for Peace into Arabic.

In a message read by Akash Ouchi, SGI representative for South Asia and the Middle East, Mr. Ikeda praised the gathering as a renaissance of poetic hearts connecting people's minds beyond language and nationality. Some 330 scholars, students and poets from 11 countries attended the event.

[Adapted from an article in the March 6, 2014, issue of the Seikyo Shimbun, Soka Gakkai, Japan]