National University of Villa María (UNVM) in Córdoba Province, Argentina, presented Daisaku Ikeda, SGI president and Soka University founder, with an honorary professorship in recognition of his contributions to lasting peace and mutual understanding as a global leader of dialogue among civilizations. The conferral took place on February 21, 2014, at the SGI-Argentina Peace Hall in Buenos Aires. Attending from Japan on behalf of Mr. Ikeda were SGI General Director Yoshitaka Oba and SGI Executive Vice Women's Leader Yumiko Kasanuki. UNVM Rector Martin Rodrigo Gill and Vice Rector Maria Cecilia Ana Conci were also on hand to preside over the ceremony.

In a citation, Dr. Conci introduced Mr. Ikeda as a leader who has promoted peace and humanistic education, intercultural dialogue and exchange of ideas and continues to inspire individuals to manifest their inner potential, enabling them to learn from and overcome hardships in life.

In a message, Mr. Ikeda remarked that the heart has wings and that his had soared the distance of 18,000 kilometers, enabling him to be together in spirit with all the participants. He expressed his heartfelt appreciation for the honor from the Argentinian university, saying he was receiving it together with the SGI-Argentina members who are contributing to society as good citizens and SGI members around the world who hold Argentina in high esteem. He said he understood the university emblem to represent individuals who have received illuminating scholarship in the humanities and natural sciences of UNVM with an aim of finding solutions to complex social issues. In keeping with this, Mr. Ikeda proposed to uphold, together with Argentinean youth, the following pledge: 1. To live valiantly in service of ordinary citizens; 2. To uphold the absolute dignity of life; and 3. To advance dauntlessly toward progress and success. 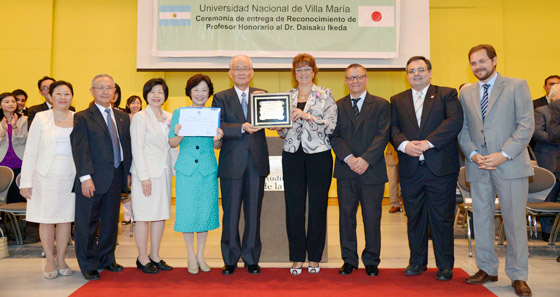 Conferral ceremony at the National University of Villa María in Argentina

[Adapted from an article in the February 23, 2014, issue of the Seikyo Shimbun, Soka Gakkai, Japan]