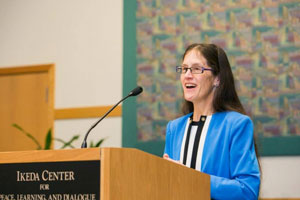 CAMBRIDGE, USA: On February 22, 2014, the Ikeda Center for Peace, Learning, and Dialogue hosted an author event in celebration of the recent publication of The Art of True Relations: Conversations on the Poetic Heart of Human Possibility, a dialogue between Daisaku Ikeda and Sarah Wider, professor of English and Women's Studies at Colgate University, USA. The event was titled, "The Poetic Heart of Human Possibility," the subtitle of the book, which was recently released by Dialogue Path Press, the publishing arm of the Ikeda Center.

During her remarks Dr. Wider touched on many subjects from the book including the conditions that give rise to human possibility, and the relationship between possibility and poetry. To illustrate, she shared a section from The Art of True Relations where Daisaku Ikeda recalls a conversation with South African poet Oswald Mtshali during which the two men discussed how one becomes a poet. Oswald Mtshali said to Mr. Ikeda:

My mother's death was a shock to me, so great that I almost couldn't recover from it. It took me a long time to get over it. But eventually, I noticed something. Whatever strength I had was something my mother had given to me, left to me. My mother's words were alive in me; my mother lived on inside me. When I recognized that, a poem to my mother welled up spontaneously from the depths of my heart.

Those of us who have lost our mothers, said Dr. Wider, know this unique pain. Yet, it was not the pain and emptiness that gave birth to his poetry. His poetry, Dr. Wider clarified, claims its origin "not with absence or loss but in presence and strength." As he said, "My mother's words were alive in me." Because others' words live inside us, Dr. Wider urged that we take care to honor those words that contain possibility and potential, and to be on guard against those that deflate us and shut down options. "I am still startled," she said, "by how much resistance meets an invitation to imagine a different way of being." So often, she observed, our expressions of possibilities are met with phrases such as "That will never happen," "That's idealistic," "That's not the way the world is." 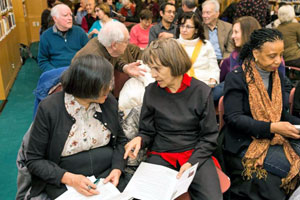 Participants break out into small groups

Asking attendees to gather into small groups, Dr. Wider encouraged participants to discuss what makes the poetic heart possible in a given time or place and how we nourish those sources and places. After several minutes of small group discussion on poetry and human possibility, Dr. Wider invited participants to share their insights. One woman captured the essence of the topic, observing that poetry, like art in general, "enables us to transform pain and loss," and that through metaphor and imagery, poetry makes our experiences "accessible to one another."

Dr. Wider then introduced the image of the kitchen table, which forms the heart of the poem, "Perhaps the World Ends Here" composed by Native American poet Joy Harjo. The poem opens with the lines:

The world begins at a kitchen table. No matter what, we must eat
to live.

The gifts of earth are brought and prepared, set on the table. So it
has been since creation, and it will go on.

It is here that children are given instructions on what it means to be
human. We make men at it, we make women.

Citing Harjo's imagery, Dr. Wider noted, "The table welcomes all experience. Babies can soothe their sore mouths and teeth on it; wonderful food is shared at it. There is no end to the strength-giving comfort this table offers." She further points out that because a table "encompasses all of human experience, it too is the site where war has been brought into existence. Even our kitchen tables are not exempt, though I invite you to make them so." 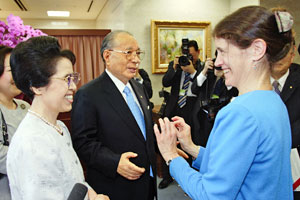 Lastly, Dr. Wider shared a memory included by Daisaku Ikeda in The Art of True Relations. Recalling the cherry trees that flourished in the garden of his family's home, Mr. Ikeda remarked: "One spring, as we sat watching their petals dance down, my oldest son started a poem with the words 'Blossom blizzard.' I continued with 'On the father's shoulders'; my wife completed it with 'On the mother's hair.' This haiku we composed together is one of my fondest memories." Of this, Dr. Wider said: "Poetry written together. A poem arising from a distinct place, from the moment in which three people perceive, experience, and share what is distinct yet common to all. There is no hierarchy. Each line is equally important."

Sarah Wider and Daisaku Ikeda first met in Tokyo, Japan, in July 2006 and agreed to collaborate on a dialogue. Their discussions were originally serialized in Pumpkin, a Japanese women's magazine, from November 2009 to February 2011. The Japanese edition of The Art of True Relations was published as a book in September 2013.

[Adapted from a February 2014 article by Mitch Bogen featured on the Ikeda Center for Peace, Learning, and Dialogue website and an article in the February 11, 2013, issue of the Seikyo Shimbun, Soka Gakkai, Japan]