On July 16, 2014, China's Harbin Normal University (HNU) in Heilongjiang, China, awarded the title of honorary professor to Soka University of Japan founder Daisaku Ikeda for his efforts to promote peace between China and Japan through cultural exchanges. At the ceremony held on the Soka University campus in Hachioji, Tokyo, Soka University President Yoshihisa Baba accepted the award on behalf of Mr. Ikeda from HNU Vice President Xu Xiaofeng. Professor Guo Hongyan of the Chinese university was also in attendance.

Harbin Normal University, located in Harbin, was founded in 1951 as a comprehensive teaching and research university. Today, it has 26 colleges, two mobile centers for post-doctoral research and academic exchange programs and intercollegiate relationships with some 70 universities and institutions in over 20 countries and territories around the world.

In the citation, Vice President Xu spoke about his studies of ancient Japanese history as well as his research into the history of Sino-Japanese cultural exchange. He remarked that both countries have a longstanding history of friendship and shared his hopes to continue this tradition, emphasizing the importance of education in fostering the spirit of cooperation toward ensuring peace and prosperity in Asia and the world. He stressed that education is not merely a matter of increasing knowledge, but vital to shaping one's character and cultivating humanity, as modeled by Mr. Ikeda.

In a message, Mr. Ikeda fondly recalled his meeting with the late Chinese Premier Zhou Enlai 40 years ago. He learned that Premier Zhou had greatly valued HNU and visited the school on numerous occasions, even stating at one point to a friend that he himself once considered becoming a professor there. Mr. Ikeda praised HNU for fostering educators who embrace the educational legacy of Premier Zhou and expressed his hopes that the school would continue to carry forth its tradition of humanistic education and raise capable leaders for the future. 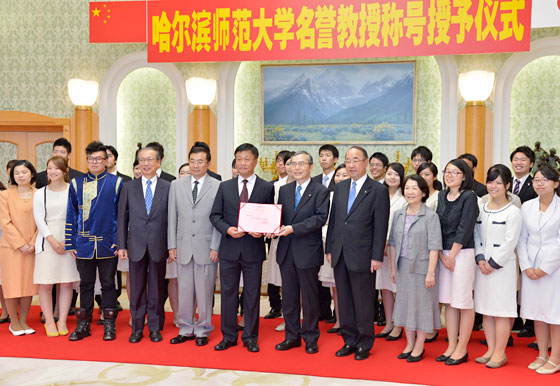 [Adapted from an article in the July 17, 2014, issue of the Seikyo Shimbun, Soka Gakkai, Japan]