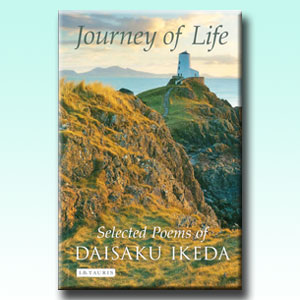 LONDON, UK: Publisher I.B. Tauris has released Journey of Life: Selected Poems of Daisaku Ikeda, the most comprehensive collection of Mr. Ikeda's poems in English to date. The first of a three-volume compilation, Journey of Life features fifty poems composed between 1945 and 2007 including: "Blossoms that scatter" (1947), written when Mr. Ikeda was seventeen; "Daybreak" (1966), one of a handful of poems published during the 1960s; and "August 15--The dawn of a new day" (2001), one of the more than 200 long-form poems composed between 2000 and 2006.

The selected poems in Journey of Life touch on a broad range of subject matter including nature, mothers, peace, justice, education and Mr. Ikeda's encounters with world leaders. However, as Dr. Ronald A. Bosco, former president of World Poetry Society Intercontinental, writes in the foreword: "Now in his eighties, and having spent his years engaged in genuine lifetime learning and public advocacy to improve the human condition[,] . . . across the poems gathered here Ikeda admirably demonstrates his unwavering commitment to nurturing the development of a humanistic global culture."

[Adapted from an article in the June 21, 2014, issue of the Seikyo Shimbun, Soka Gakkai, Japan]