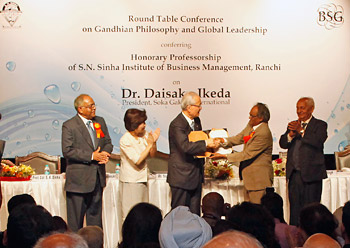 The Satyendra Narayan Sinha Institute of Business Management (S.N. Sinha Institute) in Ranchi, India, conferred an honorary professorship upon Daisaku Ikeda, SGI president and Soka University founder, the 12th academic honor he has received from India. The conferral ceremony by proxy took place on March 19, 2014, at the Chinmaya Mission Hall in New Delhi, during a round table conference on Gandhian philosophy and global leadership organized by the S.N. Sinha Institute and Bharat (India) Soka Gakkai. Mr. Ikeda was recognized for promoting Gandhi's philosophy of nonviolence and promulgating the Buddhist ideal of human revolution that espouses the belief in the great potential of every individual, whose positive transformation positively influences their environment and all those around them. In a citation, S. N. Sinha Institute Chair Singh commended Mr. Ikeda as a world leader dedicated to global peace and humanity's happiness through his promotion of education and belief in the power of dialogue.

Established in 1978 by the Satyendra Narayan Sinha Educational Trust, the S.N. Sinha Institute offers various management degree programs for fostering leaders who will shoulder responsibility for social, economic and technological development in various sectors of society.

In a message read by SGI General Director Yoshitaka Oba, Mr. Ikeda lauded founder Dr. Satyendra Narayan Sinha for his dedication to the independence movement led by Gandhi and his efforts to empower common people through education. Referring to Dr. Sinha's spirit of "innovation"--introducing something new and inspiring others to achieve excellence through dynamic leadership, Mr. Ikeda said: "The key to breaking through today's social impasses lies in people's willingness to engage in continuous innovation and progress, instead of settling for the status quo. It lies in our determination to persist in the challenge to pursue higher ideals, as we work and support each other to bring together human wisdom and strength." Mr. Ikeda found it especially noteworthy that the Indian institute "has integrated the Gandhian tradition of non-violence and Buddhist philosophy into [its] academic program to examine ways in which compassion and creativity may be introduced into our socio-economic system," and remarked that the SGI's efforts toward "value-creating" education deeply resonates with the aims of the S.N. Sinha Institute.

[Adapted from an article in the March 22, 2014, issue of the Seikyo Shimbun, Soka Gakkai, Japan]