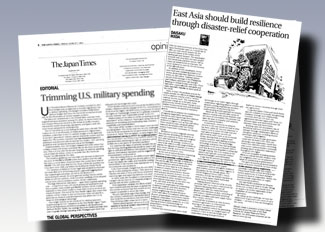 In advance of the third anniversary of the Great East Japan Earthquake, SGI President Daisaku Ikeda put forth a proposal for neighboring countries to develop a system of cooperation for responding to natural disasters that includes not only immediate relief following a disaster, but also disaster preparedness and post-disaster recovery. He proposes "the establishment of regional cooperative mechanisms focused on reducing damage from extreme weather and disasters, strengthening resilience in regions such as Asia and Africa. These would function alongside global measures developed under the United Nations Framework Convention on Climate Change." "Such cooperation is facilitated by geographic proximity," he says, "as is the sharing of lessons and knowledge on preparedness among countries exposed to similar threats."

[Link to East Asia Should Build Resilience Through Disaster-Relief Cooperation]