Chartered in 1964 as a vocational language school, TFSU had a fresh start in 1974 when it merged with a teacher's college and then in 2010 when it achieved university status and received its present name. The university specializes in language and cultural studies and its humanities department offers programs in English, Japanese, Korean, Arabic, French, Russian, German, Spanish, Italian, Portuguese and Swahili studies, as well as translation and interpretation and Chinese literature. Its 10,000 students have an opportunity to participate in study abroad programs among the 70 universities that are a part of TFSU's international network, and at any given time, some 100 professors and experts from abroad teach at the university.

In a citation, President Xiu stated that Mr. Ikeda was being recognized for his longstanding contributions to world peace and Sino-Japanese friendship. He further stated that besides visiting China many times and engaging in dialogue with generations of Chinese leaders such as Premier Zhou Enlai and his wife, Deng Yinchao, President Jiang Zemin and President Hu Jintao, Mr. Ikeda was among those who, from early on, advocated normalization of diplomatic relations between China and Japan.

In a message, Mr. Ikeda expressed his deep appreciation for the accolade and said his first thought on receiving this honor from TFSU was of Premier Zhou Enlai, who considered Tianjin his "second hometown." Mr. Ikeda said that following his meeting with the premier in December 1974, he had resolved to immediately take action to pave a path for friendship between their two countries for the sake of the youth. He recalled that the following year he had welcomed the first group of exchange students from China to Soka University in Hachioji, Tokyo, and how they had together planted a cherry tree on the Japanese campus dedicated to the memory of Premier Zhou. This Zhou Cherry, he said, has continued to burgeon with fragrant blossoms every year, together with the cherry tree planted alongside it in 1979 in memory of Premier Zhou's wife and partner in life, Deng Yinchao. In closing, Mr. Ikeda vowed to continue to wholeheartedly dedicate his life to strengthening Sino-Japanese friendship and to lasting world peace. 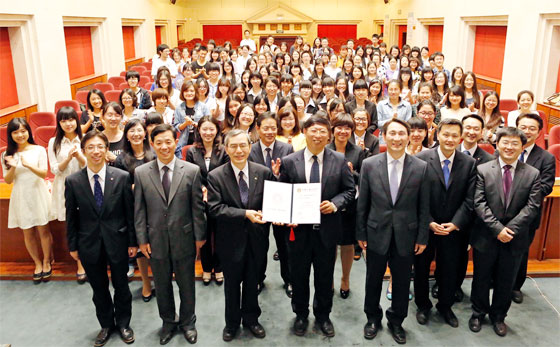 [Adapted from an article in the May 18, 2014, issue of the Seikyo Shimbun, Soka Gakkai, Japan]