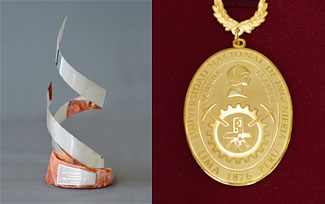 The Torch of Habich and commemorative medal

The National University of Engineering (Universidad Nacional de Ingeniería (UNI)), Lima, Peru, conferred an honorary doctorate upon Daisaku Ikeda for his longstanding contributions to peace, culture and education, the 350th academic honor Mr. Ikeda has received to date. UNI Rector Aurelio Padilla Rios, UNI Central Culture Bureau Director Fernando Caller Salas and Peruvian Ambassador to Japan Elard Escala attended the ceremony held by proxy at the Soka University campus in Hachioji, Tokyo on May 22, 2014. Rector Padilla entrusted to Soka University President Yoshihisa Baba the honorary degree certificate, a commemorative medal and a statuette, the Torch of Habich, symbolizing the legacy of the university's founder and the standard of educational excellence set by him.

UNI was founded in 1876 by the Polish engineer and mathematician Edward Jan Habich (1835-1909) at a time when there was a growing demand for engineers in Peru due to the rapid development of mining and communications. Admission to its 11 faculties and 27 academic departments is highly competitive. Through its Japan-Peru Seismic Disaster Prevention Center, UNI collaborates with seismic research centers of major Japanese universities to study the effects of earthquakes and tsunami as well as risk and damage containment. Today, the university, with an enrollment of some 12,000, is widely regarded as Peru's foremost institution of higher learning in science, technology and the arts; many of its alumni are active in the forefront of various industries, academia and government.

In his conferral speech, Rector Padilla commended Mr. Ikeda for his dedication to advancing dialogue and mutual understanding among the world's citizens for half a century. The principles of Buddhism, which lie at the heart of Mr. Ikeda's ideals, are not well known in Peru, he said, but the continuing efforts of SGI members who are promoting Mr. Ikeda's philosophy accompanied by a growing interest in Oriental culture among Peruvian academics have culminated in 11 institutions of higher learning in Peru recognizing Mr. Ikeda with honorary academic degrees, the highest honor a university can bestow. Dr. Padilla further stated that young people have a tendency to forget the struggles of their predecessors and have the mistaken idea that whatever they have is deserved without the need for fulfilling their obligation to society. As global citizens who will shoulder the future in their respective fields of endeavor, he said, they should take to heart the ideals of Dr. Ikeda, who believes human beings must undergo a "human revolution"--an inner-directed positive transformation--in order to grapple with the various ills of society such as armed conflict, environmental degradation, disparity in the distribution of wealth and ethnic strife.

In his acceptance message, Mr. Ikeda expressed his appreciation for the honor from UNI. He also gave thanks for the deeply significant Torch of Habich, which he said had inspired in him three "flames" of wisdom he hoped to share with the Soka University and Soka Women's College representatives in the audience: (1) The flame of exploration and creativity with which to transform adversity into energy for progress; (2) the flame of development and a challenging spirit as the catalyst for transformation; and (3) the flame of perseverance and tenacity of purpose with which to glean 1,000 victories from 1,000 failures. 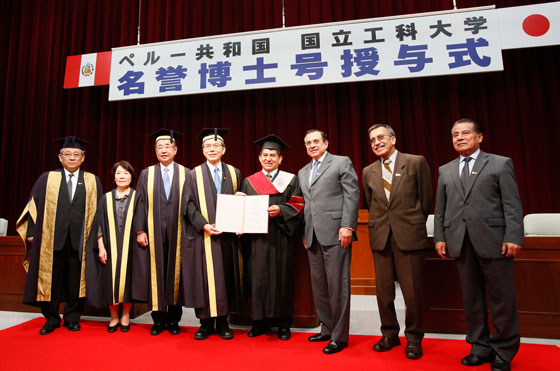 [Adapted from an article in the May 23, 2014, issue of the Seikyo Shimbun, Soka Gakkai, Japan]