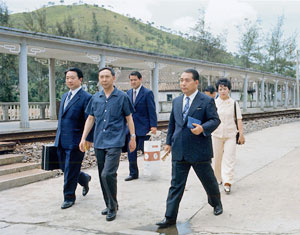 SGI President Ikeda (2nd from right) and Mrs. Kaneko Ikeda (right) walk across the railroad bridge from Hong Kong into China on May 30, 1974, two years after the normalization of Sino-Japanese diplomatic relations.

May 30, 2014, marks the 40th anniversary of Daisaku Ikeda's first visit to China. In recognition of the SGI president's numerous cultural contributions that serve to link people around the world, the Center for the Study of the Power of Chinese Culture (CSPCC) at Beijing Normal University celebrated this milestone by appointing him an honorary international chairperson. The conferral ceremony took place in Beijing on May 26, attended by a Soka Gakkai youth delegation from Japan visiting China on a Sino-Japanese friendship exchange. Soka Gakkai Youth Division Leader Taro Hashimoto accepted the appointment certificate on behalf of Mr. Ikeda.

Gao Zhanxiang, chair of the Chinese Culture Promotion Society, who also serves as CSPCC honorary chair and who turned 80 this year, stated, "Mr. Ikeda is an old friend of the Chinese people and is a spokesperson as well as a standard bearer of friendship for both [Chinese and Japanese] cultures." In April 1979, as head of an All-China Youth Federation delegation visiting Japan, Mr. Gao had met Mr. Ikeda on the campus of Soka University in Hachioji, Tokyo, where they planted a cherry tree dedicated to Deng Yinchao, the widow of Premier Zhou Enlai. The two continued to cultivate their friendship over the years, culminating in a dialogue published in 2012.

In his message, Mr. Ikeda expressed his appreciation and delight in receiving this honor. He referred to the "power of culture" described by Mr. Gao in their dialogue as the power that links the world and finds empathy and consonance among people. This power of culture, Mr. Ikeda stated, is a formidable force and the key to creating a global society based on peace and harmonious coexistence, quite distinct from the political, financial and scientific goals that have been the motivating rationale dominating contemporary society, sometimes to its detriment. Mr. Ikeda remarked that both Zhou Enlai and Sun Yat-sen, a Chinese revolutionary and first president and founding father of the Republic of China, placed great store in the power of culture, believing that lasting peace could be established when people united on equal terms and advanced along the righteous path of humanism. Humanity should make efforts to bring to bear in the 21st century the hopes and dreams of these two forerunners, affirmed Mr. Ikeda. 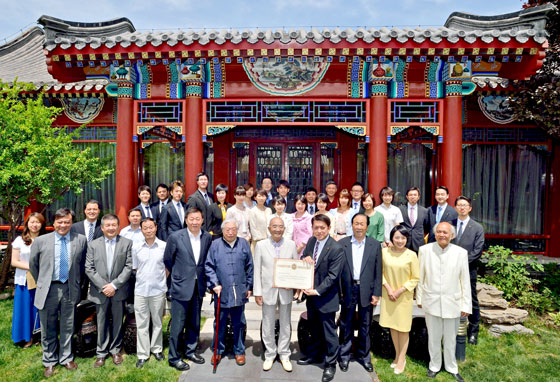 [Adapted from an article in the May 30, 2014, issue of the Seikyo Shimbun, Soka Gakkai, Japan]