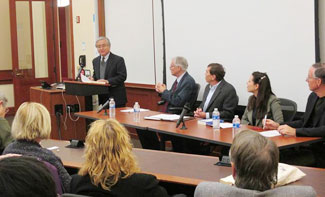 NEW YORK, USA: On November 15, 2014, Professors Jim Garrison and Larry Hickman introduced Living As Learning: John Dewey in the 21st Century, coauthored with Daisaku Ikeda, at Teachers College, Columbia University, USA. The dialogue, recently released by Dialogue Path Press, the publishing arm of the Ikeda Center for Peace, Learning, and Dialogue, brings together the pragmatism of Dewey with the humanism of Soka education to explore fresh ideas for solving today's educational stalemate.

Sponsored by the Ikeda Center, the Arts & Humanities Program at Teachers College and the Education Program at the college's Gottesman Libraries, the talk began with Ikeda Center President Richard Yoshimachi reflecting on Mr. Ikeda's lecture, "Thoughts on Education for Global Citizenship," which he gave at Teachers College in 1996. Mr. Ikeda put forth that global citizenship, which naturally leads to greater peace, is something each of us can and should aspire to. Mr. Yoshimachi highlighted how this theme is further developed in Living As Learning, with Drs. Garrison and Hickman in agreement with Mr. Ikeda that the fostering of global citizens is, in Dr. Hickman's words, the "most vital task of education."

Dr. Larry Hickman, director of the Center for Dewey Studies and professor of philosophy at Southern Illinois University Carbondale, USA, detailed the fundamental agreement Dewey and Soka education have on this point. What Soka education founder Tsunesaburo Makiguchi termed "value creation," Dewey termed "growth," Dr. Hickman shared, adding that "in each case, there is an emphasis on learning, learning to learn, and, most especially, learning to adjust to changing circumstances or context."

Dr. Jim Garrison, professor of philosophy of education at Virginia Tech University in Blacksburg, Virginia, USA, addressed Dewey's concerns for America's future as expressed in Individualism, Old and New, where Dewey spoke of "quantification, mechanization and standardization[,] . . . the marks of the Americanization that is conquering the world." Dr. Garrison added: "Such Americanism has become a new kind of imperialism shared by all the global powers within the new global economy. . . . It is an anti-humanistic travesty of individualism and the uniqueness of human potential." In contrast, Dewey and Soka education work toward an America in which "our creative acts matter in the course of events."

Dr. Hickman and Dr. Garrison also participated in a dialogue session with the gathered students and faculty. Topics covered included how universities can open themselves to local communities, how Dewey might rearticulate his philosophy for today's climate, and how dialogue between pragmatism and Buddhist humanism can bolster multiculturalism.

Dr. Hickman first met Daisaku Ikeda in Japan in 2001. In 2008, Dr. Garrison and Dr. Hickman traveled to Japan to present Mr. Ikeda with the John Dewey Society's honorary lifetime membership in recognition of his efforts for world peace and social justice through the philosophy and practice of value-creating education. The idea of collaborating on a dialogue grew out of discussions they held at that time. Their ongoing dialogue was initially serialized in the Japanese education monthly Todai from December 2009 to July 2011. A Japanese edition of their discussions was compiled and published as a book and released in April 2014.