The S.F. Gogolev Yakutsk Teacher-training College (YTTC) in the Sakha Republic, Russia, presented Daisaku Ikeda, SGI president, with an honorary professorship for his longstanding contributions to the cause of lasting world peace. The conferral took place on September 16, 2014, on the college campus in Yakutsk, coinciding with the college's centennial celebrations. YTTC Director Klavdia Kopilova entrusted the certificate and a commemorative badge to SGI General Director Yoshitaka Oba, who accepted them on Mr. Ikeda's behalf. In attendance were faculty members and students as well as SGI representatives from Japan headed by Mr. Oba.

Founded as an institute for training secondary school teachers in 1914, in 2010 YTTC combined with another college and now has six faculties, including preschool education, elementary education, music education and physical education, with two campuses in Yakutsk, the capital of the Sakha Republic in eastern Siberia. The former YTTC had also honored Mr. Ikeda prior to the merger, in 2009. YTTC was recently selected as one of "100 Colleges of Excellence" by the Russian Federation.

The college is named after S.F. Gogolev (1896-1933), a famous political figure, who was a YTTC graduate, as was Platon Oyunsky (1893-1939), writer, translator and one of the founders of modern Yakut literature.

Since learning about Mr. Ikeda over 10 years ago, Director Kopilova has continued to read his published works and says she respects him for his active pacifism and concurs with his belief in people and their quintessential value.

In a message, Mr. Ikeda expressed his appreciation for receiving the academic honor on the occasion of the college's centennial. He lauded the pedagogy of V.P. Vasilevsky, who was the college's first director 100 years ago and authored its three mottos: teachers should nurture hearts; teachers should help students cultivate their potential; and teachers should make every effort to correctly guide students as they passionately pursue their aspirations. Based on these mottos, Mr. Ikeda proposed three guidelines for the college toward cultivating humanistic education in the next 100 years: Be the sun that inspires, trusting in and shining a light upon people's potential; be a great tree of indomitable intellect that remains undaunted amidst any storm; and be a mighty river of peace and harmonious coexistence that connects the hearts of humanity. 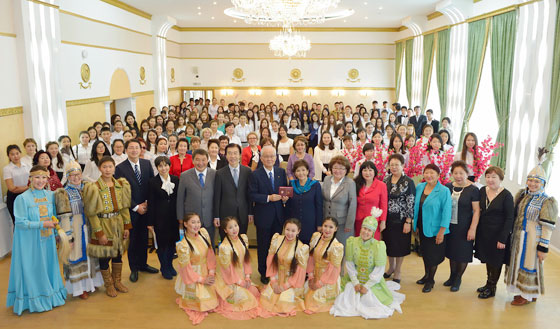 [Adapted from an article in the September 19, 2014, issue of the Seikyo Shimbun, Soka Gakkai, Japan]