University of the East in the Philippines Presents Honorary Doctorate

University of the East (UE) presented SGI President Daisaku Ikeda with the degree of Doctor of Humanities, honoris causa, at a ceremony on the Manila campus, on September 30, 2014. Mr. Ikeda was recognized for his steady efforts to open a path to global harmony and peace. In attendance were: Dr. Minella C. Alarcon, member of the Commission on Higher Education of the Philippines; some 400 UE representatives--Board of Trustees Vice Chair Jaime J. Bautista, President Ester Albano-Garcia, Chancellor Linda P. Santiago of the Manila Campus, Chancellor Zosimo M. Battad of the Caloocan Campus, faculty and students; and SGI Vice President Hiromasa Ikeda, representing his father.

Begun in 1946 as a preparatory school for Certified Public Accountant examinations, the school was granted university status in 1951 and changed its name to University of the East. For the January 2011 licensure exams, the Colleges of Medicine, Nursing and Physical Therapy had passing rates of 96%, 98% and 100%, respectively, some of the highest passing rates in the country. With its main campus in Manila, UE has satellite campuses in Caloocan City and Quezon City.


"Dr. Ikeda, through his bold but humble leadership and persistent yet profound push for inner and global harmony, is unique in his fervent belief in not just the possibility but the perceptibility, the palpability, of peace. Through his words and actions, Dr. Ikeda strongly suggests that intangible concepts such as friendship, hope, love and, yes, peace are not just present all around us despite the continued prevalence of enmity, despair, hate and war. . . . Rather than merely being abstracts that reflect human aspirations, friendship, hope, love and peace as far as Dr. Ikeda is concerned may as well be as tangible as your skin and the clothes on it, your feet and the floor they are standing on, your eyes and all that you see. In other words, Dr. Ikeda has spent his entire, colorful life navigating the complexities of so simple a concept: that peace, despite any evidence to the contrary, is within mankind's grasp."

In a message read on his behalf at the ceremony, Mr. Ikeda expressed his joy and honor in joining the Philippine university that is pioneering the effort to educate global citizens and aspires to realize the grand vision of José Rizal, the hero of Philippine independence as stated in UE's Vision Statement, as "an institution of higher learning committed to producing morally upright and competent leaders in various professions, imbued with a strong sense of service to their fellowmen and their country." 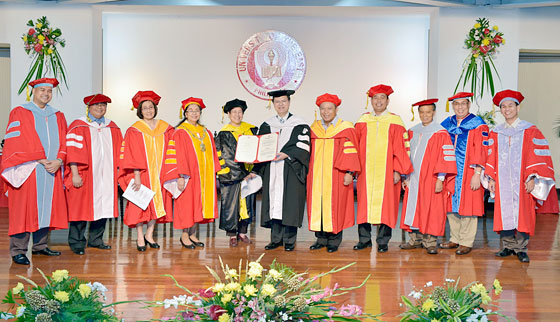 [Adapted from an article in the October 2, 2014, issue of the Seikyo Shimbun, Soka Gakkai, Japan]