Russian Edition of The Wisdom of the Lotus Sutra Published 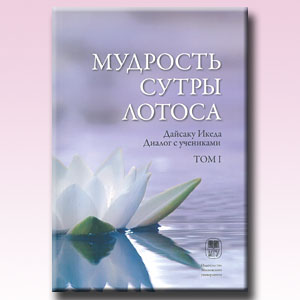 MOSCOW, Russia: Moscow State University Press has published a Russian edition of volume one of The Wisdom of the Lotus Sutra, a multi-volume work in which Daisaku Ikeda and three members of the Soka Gakkai Study Department--Katsuji Saito, Takanori Endo and Haruo Suda--discuss each chapter of the Lotus Sutra, its history, insights and capacity to empower individuals and transform contemporary society.

The publication of this work, which commemorates the 40th anniversary of Mr. Ikeda's first visit to Russia (the USSR at the time) in September 1974, includes a foreword written by Dr. Abdusalam Guseinov, director of the Institute of Philosophy of the Russian Academy of Sciences (RAS), and Dr. Margarita Vorobyova-Desyatovskaya, an authority on the study of the Lotus Sutra and a researcher at the RAS Institute of Oriental Manuscripts.

To date, The Wisdom of the Lotus Sutra has been translated into 12 languages including French, German, Chinese, Italian, Spanish, Portuguese and Danish.

[Adapted from an article in the September 8, 2014, issue of the Seikyo Shimbun, Soka Gakkai, Japan]