On April 18, 2015, Madurai Institute of Social Sciences (MISS), India, presented Daisaku Ikeda, SGI president and Soka University founder, with the title of Honorary Professor in Social Sciences in recognition of "his outstanding and valuable contributions for the cause of world peace." The conferral ceremony was held on the MISS campus during their 46th College Day Celebrations and was attended by the institute's founder and Chair D.V.P. Raja, Principal M. Kannan, and 600 student and faculty representatives. Bharat Soka Gakkai Honorary Deputy Chair Akash Ouchi accepted the award on behalf of Mr. Ikeda.

Located in Madurai, Tamil Nadu, MISS was founded on October 2, 1969, on the centenary of Mahatma Gandhi's birth, by Dr. Raja out of his hope to foster capable youth who would work for the betterment of humankind, particularly for the most vulnerable members of society, and promote peace and prosperity in the world. The institute, which began with an enrollment of 4 students, attained autonomous status in 2009 and currently has 1,000 students taking courses in social work, computer science, commerce and English.

In a citation, Dr. Raja lauded Mr. Ikeda for his unwavering commitment to peace which, Dr. Raja said, stemmed from Mr. Ikeda's experience of witnessing the misery and cruelty caused by war. Dr. Raja remarked that just as he believes "serving mankind" is the noblest way to live, Mr. Ikeda has dedicated his life to doing exactly that, and it is because Mr. Ikeda embodies the spirit of true humanism that he is able to accomplish such remarkable achievements.

In an acceptance message read by a representative, Mr. Ikeda expressed his deep appreciation and joy in sharing this honor with fellow SGI members, especially in India, who are striving to advance peace, culture and education as civic-minded citizens. Citing Mahatma Gandhi who firmly believed that "man's triumph will consist in substituting the struggle for existence by the struggle for mutual service" and that "the law of the brute will be replaced by the law of man," Mr. Ikeda shared his determination to foster capable individuals, stating, "It is our unwavering resolve to take a great leap toward this new triumph for humanity that Gandhi so ardently desired, doing so by patiently encouraging and nurturing one young leader after another, and sending into society an unending stream of youth who will devote themselves to serving the people." 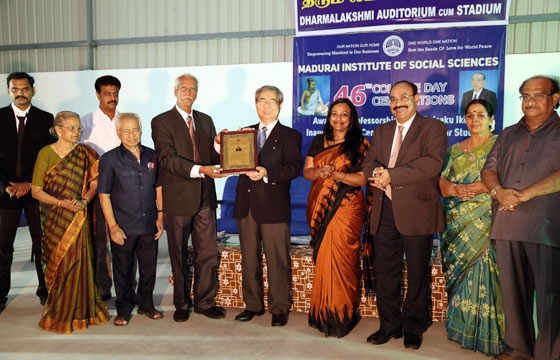 [Adapted from an article in the April 24, 2015, issue of the Seikyo Shimbun, Soka Gakkai, Japan]