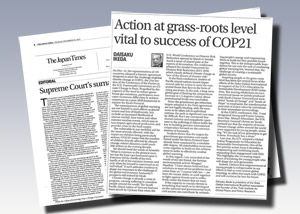 Climate change is already a crisis in progress, causing suffering to countless people around the world, writes SGI President Daisaku Ikeda in an article published in The Japan Times on December 21, 2015. As the ravaging effects of climate change intensify--extreme weather events, raising sea levels, the impact on agricultural production--it is the most vulnerable members of society, including children, who will suffer the brunt.

The article reflects on the historic consensus reached at the 21st Session of the Conference of the Parties to the UN Framework Convention on Climate Change (COP21) in Paris on December 12, 2015, for a post-2020 framework to replace the Kyoto Protocol.

Though the targets for the reduction of greenhouse gas emissions set at the conference are not legally binding, the Buddhist leader is convinced that "shared concern and empathetic openness to the suffering of others holds the key to building genuine international cooperation focused on the common interest of humanity." A vital element in the success of efforts to halt global warming will be the inspiration and involvement of people at the grass roots—especially youth.

The ideas in the article will be explored at greater length in Mr. Ikeda's 2016 Peace Proposal, which will be published on January 26, 2016, to mark the founding of SGI. [Link to 2016 SGI Peace Proposal]

[Reported in an article in the January 6, 2016, issue of the Seikyo Shimbun, Soka Gakkai, Japan]