The citation on the award reads in part: "Dr. Ikeda's photographs evoke a narrative in the mind of the viewer, a story with its own spirit and heart. As such, they constitute a new genre of the photographic art that we . . . have given the designation "photo literature."

Mr. Manandhar had been introduced to Mr. Ikeda's photographs through "Dialogue with Nature," an exhibition of his photographic works, held in Kathmandu, Nepal, in 2004. He comments, "I was truly inspired. Since the exhibition, my own photography has been deeply influenced by Dr. Ikeda's works. In particular, when I saw the photograph he took of the Himalayas, I felt as though a boundless story was unfolding before me. The brilliant crimson of the sunset skies, together with the green mountain range in the foreground, are expressions of Nepal's nature. From the foot of these peaks rises smoke from the village, depicting daily life in Nepal. It is a beautiful work harmonizing nature and human activity." 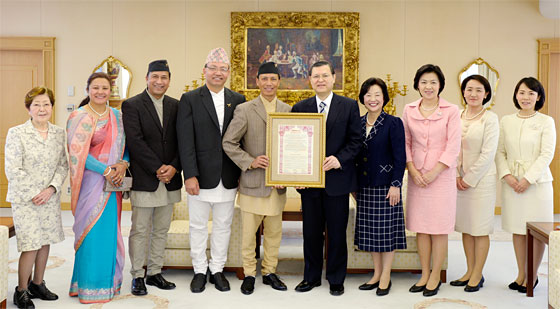 [Adapted from an article in the December 9, 2015, issue of the Seikyo Shimbun, Soka Gakkai, Japan]