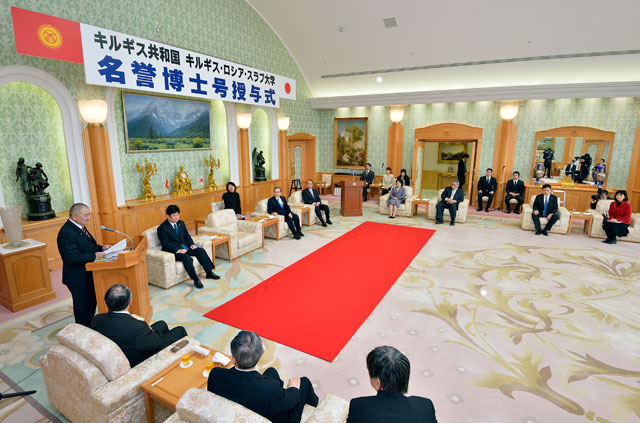 Kyrgyz Russian Slavic University (KRSU), Kyrgyz Republic, presented an honorary doctorate to Daisaku Ikeda, SGI president and Soka University (SU) founder, for his contributions to the development of Kyrgyz–Japan friendship and his dedication to fostering the youth. The conferral ceremony by proxy took place on February 25, 2015, on the SU campus in Hachioji, Tokyo. SU President Yoshihisa Baba accepted the diploma on behalf of Mr. Ikeda, the first Japanese to receive this honor, from KRSU Dean of Humanities Amangeldy Abdyzhaparaovich Bekbalaev. Hironobu Ito, Rector’s aide from the Kyrgyz–Russian Academy of Education, was also in attendance. KRSU Rector Vladimir Ivanovich Nifadiev received Soka University’s Award of Highest Honor on the occasion.

Located in Kyrgyzstan’s capital, Bishkek, KRSU was founded in 1993 after the dissolution of the Soviet Union, aided by the treaty of friendship, cooperation and mutual assistance between the Kyrgyz Republic and the Russian Federation. The university has worked closely with the Yeltsin Foundation and in 2004, by the decree of the Kyrgyzstan President, KRSU was named after B.N. Yeltsin, the first president of the Russian Federation. KRSU has over 11,000 students enrolled in their eight faculties and about 450 postgraduate and doctoral candidates.

In his conferral speech, Dr. Bekbalaev expressed his pleasure to present the award to Mr. Ikeda, calling the SGI leader a “warrior for peace” and an unparalleled social activist and advocate of fresh, humanistic ideals. Mr. Ikeda’s friendship with renowned Kyrgyz writer Chinghiz Aitmatov was also mentioned in reference to their published dialogue, Ode to the Grand Spirit, which explores topics of humanism, love for humankind and the spirit of justice, read and studied by numerous students and scholars in Kyrgyzstan.

In an acceptance message read by a representative, Mr. Ikeda conveyed his deep appreciation for the honor and stated his determination as a newly installed member of the faculty to uphold the flame of humanistic education that has been passed down by the Kyrgyz university. He confirmed the significance of the torch depicted in the university emblem, indicating that it represents the flame of wisdom that brightens all darkness, the flame of encouragement that instills hope-filled passion in youth and the flame of courage for challenging fresh creativity. Mr. Ikeda called on everyone present to ignite this blazing flame of humanism toward the creation of a global society of peace and harmonious coexistence.

[Adapted from an article in the February 26, 2015, issue of the Seikyo Shimbun, Soka Gakkai, Japan]