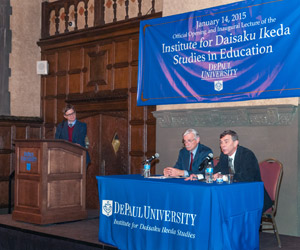 On January 14, 2015, the Institute for Daisaku Ikeda Studies in Education officially opened in the College of Education of DePaul University in Chicago, Illinois, USA. The institute, which was established on April 25, 2014, will research the philosophy and practice of Soka ("value-creating") education, first formulated by Japanese educator Tsunesaburo Makiguchi (1887-1944) and his protégé Josei Toda (1900-1958) and given concrete expression by Mr. Ikeda through his establishment of the Soka school system. There are today 14 Soka schools and universities in seven countries.

Jason Goulah, director of the Institute, summarized the Soka approach as aiming to "foster citizens who can create their own value, not consume the value of others." He noted too the correlation between Soka education and DePaul's Vincentian values of honoring the dignity and unlimited potential of all people. Renowned John Dewey scholars, Dr. Jim Garrison and Dr. Larry Hickman, who coauthored in 2014 with Daisaku Ikeda Living as Learning: John Dewey in the 21st Century, gave a joint commemorative lecture.

As well as researching and expanding awareness of the educational ideas and practices of the three founders of Soka education, the institute will conduct workshops, lecture series and symposia, bringing together students and educators in dialogue around these ideas.

Expressing his gratitude for the establishment of the Institute at DePaul, Mr. Ikeda wrote in a letter sent for the opening ceremony: "It is truly humbling that the institute for studies in education established at this university should bear my name, and I offer my most heartfelt congratulations on this newly created arena for academic exchange that transcends the boundaries of East and West in pursuit of global citizen education for the twenty-first century."

There are some 40 institutes and initiatives around the world given to the study of Ikeda's ideas and Soka education--including in Argentina, China, Denmark, Japan and Taiwan. But the institute at DePaul is the first of its kind in America and the Anglophone world.

[Adapted from an article in the January 29, 2015, issue of the Seikyo Shimbun, Soka Gakkai, Japan]