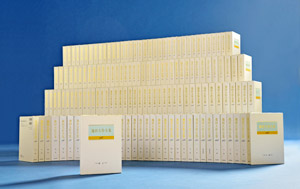 The latest volume, the final of the series, includes Mr. Ikeda's peace proposals from 2003-07 released annually on the anniversary of the SGI on January 26, proposal for United Nations reform submitted to the United Nations at its 60th general assembly in 2006 and his farsighted 1968 proposal for the normalization of diplomatic Sino-Japanese relations. It also includes the table of contents of all 150 volumes.

The project began on Soka Gakkai's 60th anniversary and the first volume of the series was published by the Seikyo Press on May 3, 1988. Originally planned as a 75-volume set, the number was augmented to 150 volumes in 1997 due to Mr. Ikeda's prolific writings. Since its introduction in 1988, the series has led Japan's best seller list in the complete works category for 27 consecutive years.

[Adapted from an article in the July 17, 2015, issue of the Seikyo Shimbun, Soka Gakkai, Japan]