Founded in 1971, the same year as Soka University, UCB is a private institution of higher learning, officially accredited by the Ministry of Education, with its main campus located in Realengo in western Rio de Janeiro. It derives its name from Humberto de Alencar Castelo Branco, who served as President of Brazil in the 1960s. Student enrollment, including the graduate school, is approximately 10,000, with 3,000 faculty members aiming to foster professionals who will contribute to the development of their communities in various fields crucial in this modern age such as business, environmental management, biology and education, among many others.

In a citation, Rector Magalhães quoted former UCB Rector Vera Costa Gissoni's favorite phrase, "Education can transform society," to support the reason for conferring the honor. While the realization of a sustainable society is a topic of intense discussion in contemporary times, said Rector Magalhães, Mr. Ikeda began raising awareness of the urgency of enacting the ideals of sustainable development more than thirty years ago, as noted in the dialogue he had with the Club of Rome founder Aurelio Peccei. Mr. Ikeda has inspired and educated people through his actions and writings, and has put the teachings he himself received from his mentor into practice by leading a grassroots people's movement for the past half century. His writings directly deal with issues confronting humanity, such as disarmament, environmental protection, education and human rights. Rector Magalhães stated that as such, Mr. Ikeda is without equal and deserving of the honor.

In an acceptance message, Mr. Ikeda commended former Rector Gissoni, UCB founder, on establishing a university built on a mission to contribute to the development of an egalitarian society. Quoting from The System of Value-Creating Pedagogy written by the father of Soka education Tsunesaburo Makiguchi, that mothers are the original educators and genuine builders of an ideal future society, Mr. Ikeda likened youth to verdant saplings that grow to sky-reaching heights thanks to the warmth and nurturing they receive from Mother Earth. Stating that UCB has proved itself as a citadel that fosters individuals who pledge to realize peace and happiness for all humanity, and for these reasons, Mr. Ikeda expressed his deep appreciation to the university for accepting him as a member of the university. 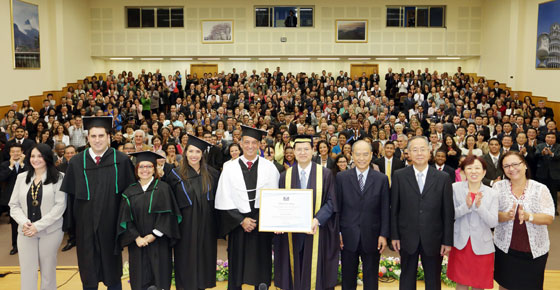 [Adapted from an article in the June 22, 2015, issue of the Seikyo Shimbun, Soka Gakkai, Japan]