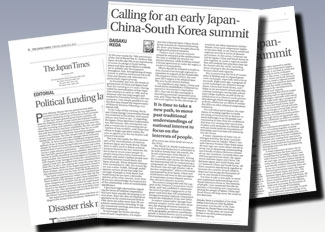 With 2015 marking the 70th anniversary of the end of World War II, SGI President Daisaku Ikeda calls on Japan "to renew its pledge to build lasting peace and step up its efforts to contribute to stability and development throughout Asia." He has high expectations for the strengthening of trilateral cooperation between Japan, China and South Korea, such as that forged in the environmental field in 1999, which has resulted in more than 50 consultative mechanisms and 100 cooperative projects. In support of enhancing regional sustainability, Mr. Ikeda urges the resumption of Japan-China-South Korea summits that had been put on a three-year hiatus due to heightened political tensions. "Efforts should be initiated to build robust mutual trust through regional cooperation in support of the Sustainable Development Goals (SDGs), the new post-2015 targets to be adopted later this year by the United Nations." As a reference, he points to the Third U.N. World Conference on Disaster Risk Reduction scheduled later in March in Sendai, Japan, and the side event cosponsored by SGI bringing together civil society representatives from Japan, China and South Korea to discuss regional cooperation toward disaster prevention and post-disaster recovery. He calls on Japan, China and South Korea to work together "to create a regional model that will embody best practices that can be shared with the world." To further promote trilateral cooperation, Mr. Ikeda encourages grassroots exchanges with a focus on youth, as well as an expansion of sister-city exchanges between the three countries. He concludes: "It is time to take a new path, to move past traditional understandings of national interest to focus on the interests of people," and further, "that the expansion of friendship and cooperation among the people of Japan, China and South Korea will help move the world in this direction."

[Link to Calling for an Early Japan-China-South Korea Summit]