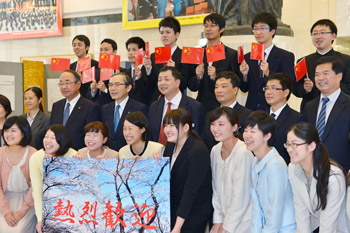 Founded in 1958, Foshan University is a merger between its predecessor and Foshan College of South China Agricultural University and is administered by the governments of Guangdong province and Foshan city. Located in Foshan, known as one of the largest manufacturing base in Guangdong province and part of the Pearl River Delta Economic Zone, FSU has produced over 120,000 graduates.

In his conferral speech, Secretary Zeng reflected on the fact that SU was the first Japanese university to accept Chinese exchange students after the normalization of bilateral relations and expressed his appreciation for Mr. Ikeda's steadfast efforts. He also stated that as honorary professor, he believes Mr. Ikeda will play a crucial role in educating the students on the ethos of philanthropy, peace, mutual-understanding, friendship and contribution. Secretary Zeng Zheng later commented: "I received the same warm welcome from the Soka University students as I did 12 years ago on my first visit. I am extremely pleased to see that the spirit of Sino-Japanese friendship forged through Mr. Ikeda's efforts has been passed down and inherited by the students."

In an acceptance message read by Soka University Board of Trustees Chair Yasunori Tashiro, Mr. Ikeda expressed his deep appreciation for the honor and dedicated it to the father of Soka education, Tsunesaburo Makiguchi. Referring to the educational principles valued at FSU, Mr. Ikeda encouraged students to brim with passion to reform one's own heart and ideals to open the way to fresh creativity as well as deepen and expand solidarity based on the spirit of "many in body, one in mind." He stated that when youth have appreciation for their parents and for the people in their lives and make efforts to repay their debt of gratitude, they develop the noblest of character, the strongest of spirit and the most magnanimous heart. Therein lies the wellspring of humanistic education to which we should all return.

[Adapted from an article in the May 29, 2015, issue of the Seikyo Shimbun, Soka Gakkai, Japan]