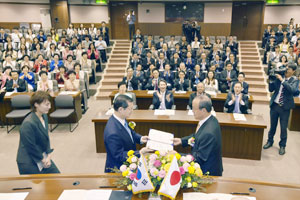 On May 4, 2015, the University of North Korean Studies (UNKS), Republic of Korea, awarded the title of Honorary Chair Professor to Daisaku Ikeda, Soka University founder and SGI president, for his contributions to promoting peace through the development of humanistic education and fostering friendship between Japan and South Korea. The conferral ceremony, held on the UNKS campus in Seoul, was attended by UNKS Honorary President and founder Park Jae Kyu, President Song Minsoon, Professor Shin Jong-Dae and representative faculty members. SGI Vice President Hiromasa Ikeda traveled to South Korea to accept the award on behalf of his father.

UNKS began as a graduate school at Kyungnam University in 1998 as the first in South Korea to specialize in North Korean studies. Founded on the research experience of Kyungnam University's Institute for Far Eastern Studies, UNKS was established as an independent institution of higher learning in 2005, offering masters and doctoral programs in six specialized areas. Sharing a common understanding that the future of the Korean peninsula is dependent on changes in North Korea and the improvement of inter-Korean relations, the university incorporates both research and education in the field of North Korea and unification studies.

In a citation, President Song lauded Mr. Ikeda for his efforts to promote interaction on a personal level to build friendship between Japan and Korea, stating that Mr. Ikeda's actions transcend the barriers created by nations and ideology and demonstrate to global society the importance of harmonious coexistence and the spirit of mutual understanding. Dr. Park expressed his hopes to succeed Mr. Ikeda's efforts and work together to spread his concrete ideals for peace.

In an acceptance message, Mr. Ikeda expressed his deep appreciation for the accolade and said he accepted the award together with the members of SGI-Korea who have steadily contributed to their society as good citizens. He commended UNKS founder Park Jae Kyu for his unremitting dedication to breaking through barriers resulting from the Cold War by persistently pursuing educational and academic exchanges with institutions in the USSR and mainland China, as well as the unification of North and South Korea. Dr. Park, whose family was oppressed and tyrannized by the Japanese military regime following its encroachment onto the Korean peninsula, has been guided by his mother's words to even strive to promote friendship between South Korea and Japan. Mr. Ikeda was grateful for the opportunity to join the UNKS community with the shared aspiration to contribute to the stability and development of northeast Asia and instill hope in the youth.

[Adapted from an article in the May 8, 2015, issue of the Seikyo Shimbun, Soka Gakkai, Japan]