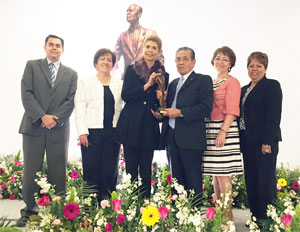 President Pagés (3rd from left) entrusts a statuette of José Pagés Llergo, representing the Peace and Culture award, to Mr. Tanaka of SGI-Mexico (3rd from right)

The José Pagés Llergo Foundation was founded in 2001 to honor the spiritual and intellectual legacy of its namesake, José Pagés Llergo, a renowned Mexican newspaperman and icon of Latin American journalism in the 20th century. The foundation recognizes individuals in various fields who are deemed to have contributed to advancing liberty, justice and equality. In 2015, Mr. Ikeda was among individuals from some 20 fields who were honored by the foundation.

Foundation President and daughter of Llegaro, Beatriz Pagés Rebollar, with concern for the interwoven social problems of poverty, unemployment, drug use and violence, has continued to work to promote a culture of human rights and social healing in her country, primarily through the media. She first learned about the SGI through a meeting with the late renowned Italian writer Carlo Coccioli (1920-2003). Finding affinity with Mr. Ikeda's philosophy of humanism and his dedication to peacebuilding, beginning in 1999, she introduced 33 of the SGI leader's essays on various social issues in Siempre!, a weekly political news magazine for which she serves as chief editor. She has also collaborated with SGI-Mexico on programs for social change and has given public lectures at the SGI-Mexico center.

[Adapted from an article in the November 24, 2015, issue of the Seikyo Shimbun, Soka Gakkai, Japan]