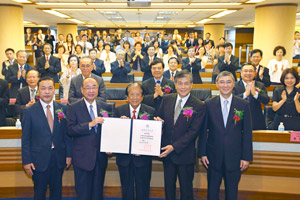 Chienkuo Technology University (CTU) presented Daisaku Ikeda, Soka University founder, with the title of Honorary Lifetime Professor in recognition of his pursuit of peace and the development of a humanistic society, as well as his contributions to education and culture. The ceremony by proxy, held on the CTU campus on November 19, 2015, commemorated the university's 50th anniversary and was attended by CTU Chairman Lien-Hsing Wu; President Farn-Shing Chen; Board of Trustees member Ming-Jye Wu; faculty deans and members; and 180 student representatives. Soka University Board of Trustees Chair Yasunori Tashiro accepted the award on behalf of Mr. Ikeda.

Established in 1965, Chienkuo Technology University has contributed to Taiwan society and its economy over the past half century by fostering numerous competent and dedicated professionals in the fields of science and technology, as set out in its mission statement.

CTU Chairman Wu lauded Mr. Ikeda's leadership as Soka University founder in fostering capable individuals who are contributing to world peace in their respective fields with a global vision. He said that the honorary lifetime professorship was being awarded to Mr. Ikeda in tribute to his significant contributions to the development of human civilization and global peace and to the advancement of cultural and educational exchanges.

In an acceptance message, Mr. Ikeda expressed appreciation for being welcomed to the CTU faculty on the auspicious occasion of the university's 50th anniversary. He cited three ways in which CTU has inspired him: First, the spirit to pave one's own path, reflecting the conviction of Sun Yat-sen (1866-1925), father of modern China, that strong aspirations lead to success. Second is CTU's core belief that fostering capable individuals is the foundation of all, crystallized in the university's educational goal of helping students develop their scholarship, innate abilities and vow of compassion. Third is CTU's desire to help students unleash their unlimited potential for creative innovation. Mr. Ikeda concluded his message stating that in today's global society, working together through educational exchange will inspire us to engage in friendly competition to produce and send forth outstanding global citizens who brim with fresh hope and creativity.

At its conclusion, the conferral ceremony resonated with the formidable spirit of development shared by the two universities: "Capable people are society's treasures; education is the foundation for peace."

[Adapted from an article in the November 20, 2015, issue of the Seikyo Shimbun, Soka Gakkai, Japan]